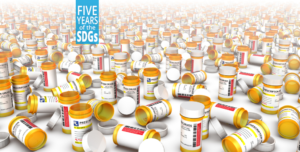 The Investors for Opioid and Pharmaceutical Accountability (IOPA) is a coalition of 61 investors with $4.2trn in combined assets under management. Beginning with the 2020 proxy season, the initiative changed its name from the Investors for Opioid Accountability to widen its focus to cover pharmaceuticals and healthcare as well as opioids. Here, Donna Meyer explains more.

During the 2020 proxy season, the Investors for Opioid and Pharmaceutical Accountability (IOPA) continued their work to stem the growing opioid epidemic in the US. This work took on even greater importance during the COVID-19 pandemic, as overdose deaths increased, likely due to job losses and stress.

Approximately 80% of people who use street drugs first misused prescription opioids. This underlying cause of the opioid epidemic drove the coalition’s focus on prescription opioids. Initially, we focused on lapses in corporate board oversight related to opioid business risks at manufacturers, distributors and retailers. Beginning with the 2020 proxy season, the IOPA added holding other pharmaceutical companies accountable for anticompetitive practices in addition to its focus on the opioid supply chain.

We asked companies to report on how they mitigate opioid-related risk by establishing board oversight committees or task forces and including independent board members in their processes. During 2020, shareholders disagreed with Johnson & Johnson’s (JNJ) and Walmart’s stance that opioids were such a small part of their total business that their boards should not be obligated to do this. A resolution received 61% at JNJ. Investors withdrew a proposal at Walmart, following the company’s promise to produce a report by October 2020. Because these resolutions have a history of getting more than 60% of shareholders’ vote (Mallinckrodt got 79%), most companies settle and agree to produce a report before the resolution goes to a vote. As of the end of the 2020 season, IOPA has received or is promised oversight reports by 15 companies in the opioid supply chain including all opioid manufacturers (eight) and all major distributors (three) and pharmacies (four).

Independent chair of the board of directors

Investors rely on the board to represent their interests. Because an independent chair, who has not previously served in management and who has no business or employment ties to the company, is critical to assuring that difficult questions are asked of management, pharmaceutical shareholders are increasing pressure for the independent board chair position. Based on IOPA engagement, the three major opioid distributors agreed to appoint independent chairs. Today, 53% of US-based companies in the S&P 500 split the chairperson and CEO roles, up from 37% a decade ago. 33% of the S&P 500 firms had an independent chair, and ISS reports that support for independent chair proposals is increasing rapidly. Although this is becoming more common in large public companies and is the standard for European and Asian pharmaceutical companies, US pharmaceutical believe that an independent chair is of particular importance when a company faces controversies that question management’s ability to navigate a crisis like the opioid litigation. During the 2020 season, we filed with seven pharmaceutical manufacturers and received votes ranging from 30% to 45%. Investors found that the more specific the proposal was about the controversies the company faces, the higher the vote, so IOPA plans to refile next season.

Investors found that the more specific the proposal was about the controversies the company faces, the higher the vote, so IOPA plans to refile next season.

1. Misconduct clawback policies including disclosure of the use of clawback

We believe policies should emphasise compliance and ensure that executives do not benefit financially from conduct that is harmful to the company and to shareholders. IOPA advocates that the company’s clawback policy (a) recovers the incentive compensation in the event of a violation of a company policy relating to noncompliance with a law or regulation that causes significant financial or reputational harm to the company; and (b) requires disclosure to shareholders in the proxy statement about such recoveries. Senior executives’ pay should be clawed back if their behaviour causes financial harm to shareholder or reputational risk to the company.

The SEC has consistently ruled in favour of shareholders when clawback proposals are challenged, and many asset managers support clawback policies. Mylan and Walmart settled with shareholders on clawback disclosure during the 2020 season. 10 of the 11 companies IOPA engaged adopted robust clawback provisions that include disclosure; only Eli Lilly has not, so the resolution will be refiled after receiving 41% in 2020.

2. Use GAAP for incentive pay calculations or disclose adjustments:

Incentive pay typically accounts for the bulk of compensation. Boards often use a custom formula, called an adjusted GAAP metric, which bears little resemblance to the calculation under GAAP. IOPA advocates for companies to use GAAP for incentive pay calculations, or that if a company elects to calculate incentives based on some customised formula, it should explain its use of non-GAAP metrics and explain in its proxy how to reconcile these with appropriate GAAP metrics. This topic is relevant to opioid as well as other pharma work because companies tend to exclude legal settlements when determining executive compensation.

In 2019 and 2020, AmerisourceBergen, Eli Lilly, Mallinckrodt, McKesson and Teva agreed to disclose adjustments in general and/or adjustments due to amounts related to cost of opioid litigation. Because early proposals asking companies to commit to using only accepted GAAP metrics to calculate executive incentives received low support, for future proposals, shareholders will ask companies to disclose how they adjust the GAAP metric for executive compensation calculations.

For the 2020 proxy season, members of the IOPA and more than a dozen pharmaceutical manufacturers and distributors, as well as retail pharmacies, participated in a facilitated working group on the topic of incentive deferrals, as an alternative to the traditional shareholder process.  Investors withdrew or agreed not to file resolutions on bonus deferrals at companies that committed to work on the issue and whose annual meetings occurred during the time the working group was convened. Although companies have generally adopted robust clawback policies, the policies are not widely used.

The working group is in its final phase of discussions, which may extend to the early fall. Investors hope the bonus deferral may become a best practice standard that could offer compensation committees more flexibility managing incentive compensation pay and bonus payouts.

In 2018, the amount of available prescription opioid medication was at its lowest level since 2006. We will continue to monitor oversight of the sales and distribution of prescription painkillers to ensure legitimate use of these drugs is satisfied while abuse is prevented, while also engaging an array of pharmaceutical manufacturers, distributors and retailers on governance issues to ensure risks to the pharmaceutical supply chain are mitigated.

Donna Meyer, PhD is Director of Shareholder Advocacy at Mercy Investments Services, where she specialises in Public Health and Health Services.  She is Co-chair of the IOPA.