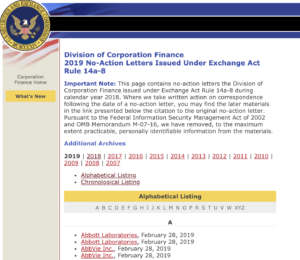 The ‘no-action’ process at the US Securities and Exchange Commission has emerged as a tactic for companies wishing to hinder investor action on climate change.

ExxonMobil’s successful efforts to keep a shareholder proposal on climate targets, filed by the Church Commissioners and the New York State Common Retirement Fund, off this year’s AGM agenda shone a light on how companies use this opaque mechanism to resist investor pressure.

As the dust settles, RI explores the process which often leaves shareholder proponents scratching their heads in confusion.

“We had $9trn of investment assets, representing a significant part of the market, saying we want to vote on this proposal and the SEC staff said ‘no, we know better than you about what you should vote on’.”

He adds that the problem with the SEC blocking such “low stakes” resolutions is that “it compels everyone to ratchet it up”.

“The question [at Exxon] could have been to investors ‘do you think the company should be setting GHG targets or not’ and suddenly it became a vote about whether the board should even remain in place.”

Under rule 14a-8 the SEC authorises shareholders with more than $2,000 worth of shares in a company, held for more than a year, to file one proposal (typically non-binding) each year to be put to the vote.

But companies can – and regularly do – challenge these by seeking ‘no-action letters’ from the SEC, which provide assurances that the regulator will not pursue the matter if the company omits it from the agenda of its annual shareholder meeting, i.e. that it will not recommend enforcement action (hence, ‘no-action’).

But Sanford Lewis, Director at the Shareholder Rights Group, the US association of governance focused investors, says the SEC is “notoriously evasive” when it comes to trying to determine if there has been a change of position on a no-action rule.

“They will always try and make it seem like they haven’t changed the rules, even as they alter their practical applicability,” he adds.

And many investors have detected a change in the SEC’s interpretation of the micromanagement rule (14a-8(i)(7)) in relation to emission targets resolutions since new guidance was issued by the SEC’s staff in November 2017.

The first sign of this, according to Millicent Budhai, Director of Corporate Governance at the Office of New York City Comptroller, was the emissions resolution at EOG Resources in 2018. She was speaking on a recent RI webinar.

According to the Shareholders Right Group, that decision ran contrary to the SEC’s “long-standing precedent” of finding “identical proposals, including at oil and gas companies, to be not excludable and not to constitute micromanagement”.

Budhai agrees, stating the “New York City Funds have been filing this sort of proposal on and off since the mid 2000’s” and expressing confusion as to why it should “suddenly become micromanagement” in the eyes of the SEC.

Josh Zinner, CEO at the Interfaith Centre on Corporate Responsibility, says that these ‘no-action’ letters should be seen in the context of a wider “attack” on shareholders’ rights driven by influential lobby groups such as the US Chamber of Commerce, the Business Roundtable, and the National Association of Manufacturers, who are putting pressure on the SEC to change the rules.

The upshot of this is that it has become “increasingly difficult” to file emission reduction proposals at some companies, Lewis says.“Because if the proposal is too specific it may be seen as micromanagement and if it is too loose the company will claim they’ve substantially implemented it [under rule 14a-8(i)(10)]”.

Lewis describes the ‘no-action’ process as a “very heavily contested” area of “informal law” that occurs within a condensed period.

The bulk of proposals, he says, are filed in November, with ‘no-action’ requests usually appearing between December and February.

Once a company sends a ‘no-action’ request to the SEC, the filer of the resolution has 30 days to respond, with arguments and counter arguments going back and forth until the SEC issues its brief verdict on whether an aspect of rule 14a-8 has been violated.

Though the SEC verdicts are, officially, informal advice, they tend to be treated as firm judgments.

But what recourse is there for investors who have been batted away by the SEC?

One option is to appeal.

This was done this season at Devon Energy, which had successfully challenged a resolution on its greenhouse gas emissions using the micromanagement argument.

The proponents’ appeal, however, also fell on deaf ears, with the SEC finding that there was “no basis to reconsider our position”.

This is typical, according to Lewis, the lawyer behind the plea, who says the appeals usually don’t succeed as you are effectively appealing to the same team that made the original decision.

There is also the option for the SEC staff to ask the Commission to review a no-action response, if it finds the shareholder request involves “matters of substantial importance and where the issues are novel or highly complex”.

In the case of Devon, it did not.

What options then are left to shareholders to voice their discontent if appeals fail?

When JB Hunt Transport successfully challenged Trillium’s emissions proposal this year, the investor opted to file an ‘exemption solicitation’ through the SEC. It urged all shareholders to withhold votes for members of the haulage firm’s Nominating and Corporate Governance Committee.

All directors were re-elected at the company’s annual meeting in April.

Trillium’s Kron questioned why an equivalent proposal asking US retail firm Ross Stores to set emissions targets was allowed but the one at JB Hunt was not.

Last year, the same resolution, which was supported by 21% of shareholders, was not opposed by JB Hunt, a sign, perhaps, that companies too have detected a changed view at the SEC and are now seeking to capitalise on it.

“I am not really clear why the SEC feels it should be picking winners and losers,” Kron says, “the SEC should be setting broad rules of the road to allow the market to do its job.”

Last year, the Office of New York City Comptroller side-stepped the SEC no-action process entirely with its resolution at TransDigm, by taking the US aerospace firm to court after it sought a no-action letter.

TransDigm settled the case out of court by withdrawing its SEC challenge; the emissions resolution was supported by 34.9% of shareholders at the annual meeting in March.

Lewis says his impression is that the costs of all these battles range from the “very minimal” to the “really extraordinarily expensive”.

When asked why companies fight so hard to avoid non-binding resolutions, Lewis says:

“If they can override this process, which is the last check and balance on company behaviour, then they can continue with business as usual, blind-spots for the long-term implications be damned.”