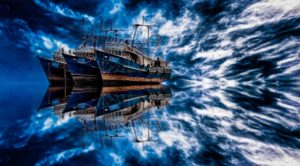 The shipping industry’s slow steaming on climate change finally appears to be coming to an end and, with the launch of the sector’s first global emissions target, its financiers now need to take stock of the implications. But climate isn’t the only ESG risk on the horizon that investors and banks need to be aware of.

Shipping’s importance to the global economy cannot be overstated, accounting for 80% in volume and 70% in value of all world trade. It is also responsible for between 2-3% of global carbon emissions, with experts predicting a rise of between 50-250% in the sector’s CO2 emissions by 2050.

But a change of course may be in store, with the sector’s first ever – and long-awaited – agreement on emissions targets announced last month.
At its 72nd meeting in London on 13 April, the International Maritime Organisation (IMO), the UN agency charged with regulating shipping, announced a global target to cut the industry’s total greenhouse gas (GHG) emissions by at least 50% from 2008 levels by 2050
Annie Bersagel, Senior Analyst for Responsible Investment at Folketrygdfondet, which manages the NOK238bn (€25bn) Government Pension Fund Norway, says that the target is important because it provides investors with “a trajectory for future emissions”.
Reaching this target, however, “will require a fundamental technology change, moving from bunker fuels towards low- and zero-emission ship solutions”, according to Anne Kvam, Head of Responsible Investment at Norwegian pension manager, KLP.
Kvam tells RI that: “Moving forward, it will be important for investors and financiers to assess the rate of change in the industry and individual companies’ robustness in staying competitive even with the possibility of more environmental regulation”.
But despite all the signs, James Mitchell, Maritime Finance Lead at global think-tank Carbon War Room, says he hasn’t “seen much of any engagement on the issue of carbon” by the industry’s financiers – referring to it as “another tragedy of horizons”.
Mitchell stresses the importance of acting now, saying: “The investment decisions made now are going to massively influence who is competitive and who is not in a decarbonised future”.
The need for investors to consider long-term cost implications when financing the shipping sector is brought into sharper focus by a recent report from The Carbon Pricing Leadership Coalition, which reveals that the average vessel age in 2016 was 20.31 years, and the typical life span is around 25 years, meaning many fleets are nearing the end of their time on the water.
“If you are an institutional investor with a longer time horizon, or you are a financier, you have a strong profit motive to start engaging now and making sure companies are prepared,” warns Mitchell.
The Carbon War Room, which estimates that commercial banks’ exposure to shipping is in the region of $355bn, is hosting a series of workshops on the issue, involving some of the industry’s largest financiers.

And it’s not just carbon emissions that are under scrutiny. The sector is also set to feel the impact of strengthened regulations around fuel sulphur limits. Addressing the issue of noxious sulphur oxide (SOx) emissions, the new rules – agreed in 2016 by the IMO – impose a significantly lower sulphur limit of 0.50% m/m in fuel, down from the current 3.5% m/m limit.
This could see fuel costs balloon by 25% when they come into effect in 2020, according to reports, as shipping companies are forced to use more expensive alternatives or install “scrubber” systems to remove emissions.Mitchell tells RI that whilst investors are beginning to “wake up to low-sulphur fuel in 2020” there is “a lot more to be done on the issue”. He added that “companies need to have a plan on how to comply” with the new regulations, and financiers must be involved in driving them to do this.
Folketrygdfondet’s Bersagel claims that regulation around fuel sulphur content is something that “every brokerage and ESG analyst is covering at the moment, and not just from an ESG perspective but more broadly what this will mean for the industry”.
Japanese shipping giant Nippon Yusen Kaisha last month announced plans to create a pioneering ¥10bn (€75m) green bond to help finance its sustainable shipping strategy, which includes the installation of SOx scrubber systems.

Beaching is the environmentally-harmful and often exploitative practice of driving decommissioned vessels on to beaches (primarily in South Asia) to be scrapped. It is an issue that has been in the spotlight this year for investors, due to high-profile divestments.
In January, the $1trn Norwegian Government Pension Fund Global excluded four shipping companies and placed another on a ‘watch list’ over the practice, based on the recommendations of its Council on Ethics.
The exclusions were based on the presumption that “companies that dispose of a ship for scrapping in this manner are fully aware of its fate”, explained Aslak Skancke, Chief Advisor to the Council of Ethics, writing for RI following the divestment. It is “a direct consequence of an active choice on the part of the company that owned the vessel to maximise its profit”, he added.
KLP soon followed suit, excluding the same four shipping companies. Kvam tells RI it now plans to “proactively” expand its focus within the shipping industry beyond beaching.
But beaching “deserves more attention from investors”, Kvam points out. Following the publication of a report on the subject in 2016, KLP attempted to “engage” other investors on the topic, she tells RI – primarily via the Principles of Responsible Investment’s investor platform. “Disappointingly”, she concedes, the efforts didn’t gain “traction from other investors”.
Mitchell believes that beaching is something that investors should have on their “to-watch list”, especially considering the extreme reputational risks associated with practice, and a tightening of EU regulation on the issue.
On the latter, Mitchell is in part referring to recent moves by the European Commission, mandating that all large ships “flying the flag of an EU Member State must be recycled only in safe and sound ship recycling facilities included in the European List of ship recycling facilities”.
In September 2017, the NGO Shipbreaking Platform reported on a ship allegedly destined to be beached in Pakistan, which was seized by Norwegian authorities due to breaches of international waste trade laws. The incident reportedly resulted in costs running into the millions for the owner.

Change seems to be coming to the shipping industry. The actions undertaken by the IMO and the European Commission, and the attention drawn by Norwegian investors’ recent exclusions could indicate a tipping point for the sector; and investors need ensure that they’re not now caught by the changing tide.

This article is part of RI’s ‘ESG Frontiers’ series, which looks at burgeoning new ESG risks for sectors and industries. Last week, RI launched the series with coverage of the palm oil sector, which can be found here.