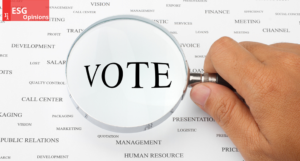 The Covid-19 pandemic has seen hundreds of investors publicly urging companies to support workers’ rights. Such public support is welcome, not least as workers are asking for support and accountability from investors.

Take the US meat processor Tyson Foods as an example. Magaly Licolli, Executive Director of worker-based human rights organisation Venceremos, urged shareholders at the company’s AGM yesterday to vote for a human rights due diligence resolution.

“Workers need, and deserve, a significant improvement in pay, paid sick leave and safe working conditions,” she noted. “It is unacceptable that workers must rely on community aid to survive while working for the most powerful US meat company.”

Going beyond engagement behind closed doors, voting on ESG proposals is becoming an increasingly important tactic for mainstream investors. Transparency on such voting decisions is key, particularly from the largest global asset managers, who own shares in nearly all large public companies, but also have significant influence on their peers. CalPERS, the largest public pension fund in the US, notes that it publishes its proxy voting decisions “to encourage shareowners to vote in accordance”, thus acknowledging the market signal such disclosure sends.

At a minimum, investors should release voting records on an annual basis and explain voting on key resolutions.

So how are industry giants voting their shares? In July 2020, more than 120 worker and advocacy groups called on Tyson’s top 10 investors to urge the company to ensure the safety and wellbeing of its workers. Subsequently, the Business & Human Rights Resource Centre reached out to those investors asking them to disclose how they would vote on the human rights due diligence proposal, which, according to Gina Falada from the Investor Advocates for Social Justice, “uplifts key concerns identified by Tyson workers, including paid sick leave, social distancing, contact tracing, line speeds, and fair compensation”.

All 10 investors are US-based asset managers and signatories to the Principles for Responsible Investment (PRI), meaning they have committed to incorporating ESG issues into their ownership practices. While five responded, none were willing to pre-disclose their votes – in fact, Aristotle Capital, Geode Capital, Invesco and LSV Asset Management do not disclose voting records at all.

Tyson’s largest investor, Vanguard, noted in its 2020 proxy voting policy notes that its funds are “likely to support [social issue] proposals that address a shortcoming in the company’s current disclosure relative to … key competitors’ practices [and that] reflect an industry-specific, materiality-driven approach.” Yet Vanguard voted against the human rights proposal at Tyson Foods with some of its funds in 2020, and recently bought nearly four million additional shares, making it the owner of a whopping 10.7% of Tyson’s shares.

This comes at a time when Tyson has to answer to allegations that it has the highest death rate – and three to four times the number of infections of workers – compared to other meat companies. Such governance and risk management failures pose financial risks to a company, and subsequently its investors, namely regulatory risks (risk of investigation due to misleading disclosure), legal risks (the company is subject of numerous lawsuits), human capital management risks (decrease in productivity and employee turnover of up to 100%), interruption in business (plant shutdowns, suspension of exports), and reputational risks (high-profile news outlets covering the issue for the past 10 months).

Other investors also show a gap between policies and their implementation: Invesco’s proxy voting guidelines note that it may vote against directors where there are “material governance or risk oversight failures … [which] may include, without limitation … significant health and safety incidents; or failure to ensure the protection of human rights.” Invesco also signed the Covid-19 investor statement calling on investee companies to keep workers safe, yet it does not disclose any of its voting records. Even worse, T. Rowe Price and State Street revealed they voted against the human rights proposal in 2019 and have not released voting records since.

Such a lack of transparency will not stand the test of time. Starting in March, the EU regulation on sustainability disclosure for the finance sector will require investors to be more transparent. The OECD Guidelines clearly define due diligence expectations for institutional investors, noting that publicly disclosing voting records is a way to demonstrate implementation of ESG policies. The Investor Alliance for Human Rights calls on asset owners to ask asset managers to disclose proxy voting guidelines and records; and the PRI, the largest global responsible investment initiative, is developing investor expectations on human rights for its more than 3,000 investor members. Civil society organisations are also increasingly holding investors accountable for how they vote on social and environmental shareholder proposals.

Beyond Tyson Foods, a recent study from three UK investors also laments the lack of attention on social issues from some ESG funds, including with regards to voting. Yet examples of how it can be done are available.

At a minimum, investors should release voting records on an annual basis and explain voting on key resolutions. Columbia Threadneedle, for example, disclosed supporting the human rights resolution at Tyson in 2020, and notes that it “engaged twice with Tyson senior leaders in mid-2020 around the company’s response to the pandemic and treatment of employees and these engagements informed our [2021] vote.”

Blackrock disclosed supporting the human rights proposal at Tyson Foods in 2020, noting that it was “not satisfied with the company’s disclosures and practices around sustainable working conditions”.

In particular, in cases of severe labour and human rights allegations, it is important that investors not only engage investee companies to inform their voting decision, but also confirm the information relayed by companies with rights holders. Fallada claims that “engagement with Tyson workers about the devastating health and economic impacts of Covid-19 proved to investors that the company's pandemic response efforts were ineffective and unresponsive to workers' greatest needs”.

Annual reporting on voting is a good starting point, but timely disclosure of voting records is even more impactful. Blackrock issued a vote bulletin just hours after the 2021 AGM detailing its engagement with Tyson Foods and the rationale for voting in favour of the human rights due diligence proposal. What’s more, CalSTRS, the second largest public pension fund in the US, and Norges Bank Investment Management, the world’s largest sovereign wealth fund, both pre-disclosed that they will be voting in favour of the resolution ahead of the AGM – a strong signal to the market and in support of workers’ rights. More transparency from investors is all the more needed at a time when the company itself is less transparent on voting results than in previous years.