Responsible Investor
Home News & Analysis Environmental The world’s oceans are under pressure, but investors still have time to...
Return to search
Hot Topics 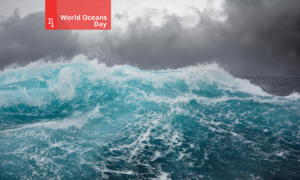 From a million miles away, planet Earth resembles a small blue marble. From one hundred million miles it’s a tiny, pale blue dot. “How inappropriate to call this planet Earth when it is quite clearly Ocean,” observed science fiction author Arthur C. Clarke.

William J. Nichols, author of the book Blue Mind, makes similar observations in his piece on humanity’s complex relationship with the ocean. It explores evolutionary and emotional connections, to real-world ties ranging from travel, health, artistry, food and economics.

The value of global ocean assets is estimated at more than $24trn making them the seventh largest economy in the world in GDP terms, says Marisa Drew, CEO Impact Advisory & Finance Department, Credit Suisse. The firm partnered with Responsible Investor on market-first research on the blue economy, in response to the precarious health of the ocean, dangerously degraded by human activity. The report, Investors and the Blue Economy, found interest in sustainable ocean-related investments is high, but industry expertise is low.

Friends of Ocean Action is trying to tackle this challenge by bringing the ocean community and investor community together to foster a shared understanding of each others’ needs. The Ocean Finance Handbook sketches out the different sectors of the blue economy and discusses the types of capital and investment models they need.

Klaas de Vos, co-author of the report, says: “The investor community has a lot that can be improved in terms of understanding what the ocean is and how it functions, and what’s different compared to terrestrial investment. And equally for the ocean community, there’s a lot of understanding that needs to be built around what we mean by investment in the ocean.”

De Vos adds that progress is being held back by a lack of information. “This was one of our big constraints in writing the handbook. It comes with caveats and assumptions. Disclosing more information to give people a sense of where capital is going in the blue economy will be really critical to unlocking more potential down the line.”

Investors and the Blue Economy concludes that it is easy to paint a bleak picture for the ocean, with investors being unaware of their impact on the marine environment. But adds: “It seems that asset owners and managers are slowly waking up to the dire state of the ocean and the major portfolio risks looming in a business-as-usual scenario.”

Last month, Norwegian asset manager Storebrand divested Metallurgical Corporation of China (MCC) over its role in dumping millions of tonnes of toxic mine waste into the ocean each year through its operations in a nickel-cobalt mine in Papua New Guinea.

“Dumping of mining tailings directly into marine environments is a controversial practice internationally. Marine ecosystems are crucial to a healthy planet and must be protected,” says Bard Bringedal, Chief Investment Officer of Equities at Storebrand Asset Management.

And major banks Citigroup and Standard Chartered have issued new policies that restrict financial submarine mine waste disposal in response to the Ditch Ocean Dumping campaign, calling on financial institutions to divest from any project or company that employs aqueous tailings disposal.

“Conservation projects, particularly those focused on marine ecosystems, are not attracting enough commercial capital due to a shortage of investment-ready projects,” explains Nicolas Pascal, Executive Director & Co-Founder of Blue Finance. “This grant enables Blue Finance to increase investment in marine conservation and economic development in Southeast Asia,” A first-of-a-kind ocean debt swap proved a huge success in March with a third of the Seychelles ocean now designated as protected as a result.

And in April, the Circulate Capital Ocean Fund, focused on the ocean plastic crisis in South and Southeast Asia, made its inaugural investments. The $106m CCOF is backed by major multinationals, such as Procter & Gamble, the Coca-Cola Company and Unilever. “It’s no coincidence that the companies that have some of the biggest challenges [with plastic waste] and the most stake in solving the problem have backed CCOF, because they want to be part of the solution,” says Rob Kaplan, CEO of Circulate Capital. The companies not only provide capital, but also technical and procurement expertise.

CCOF has so far invested $6m in two companies in India and Indonesia that recycle local plastic waste into useful products.

Products in the ocean finance space are growing, with funds such as Althelia’s Sustainable Ocean Fund, the Meloy Fund for Sustainable Community Fisheries and others highlighted in the Friends of Ocean Action report.

The ocean has remarkable resilience, according to those behind the handbook. “The recovery of whale numbers demonstrates that if we are prepared to change our destructive ways, the ocean’s rich environment allows a positive response,” say co-chairs Isabella Lovin Deputy Prime Minister, Sweden and Peter Thomson UNSG’s Special Envoy for the Ocean.