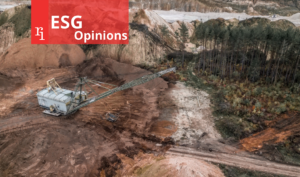 As governments and health workers around the world battle to contain the spread of coronavirus, save lives and protect the vulnerable, there is already much debate about what form the economic recovery should take.

That recovery may be a long way off. But calls for stimulus packages that will support – rather than undermine – the global effort to tackle the nature and climate crisis are growing. And governments are increasingly facing decisions about how to protect companies, and what conditionality should be placed on any bailout packages.

Little has been said, however, about how investors and financial institutions should themselves respond. Some are clinging to the hope that there may, one day, be a return to business-as-usual. But that is neither realistic, nor in their own interest.

We may never know the extent to which destruction of nature was a factor in bringing about this particularly devastating pandemic, but what seems increasingly clear is that destruction of nature and biodiversity is increasing the likelihood of pathogens transmitting from wildlife to humans, creating the conditions for future global health emergencies.

It is becoming abundantly clear that this equation is broken: that destruction of nature is starting to cost more in lost economic growth – through wildfires, droughts, floods and storms, and now, possibly, a pandemic which has led to the lockdown of more than two billion people – than it is contributing.

This is not a new discovery. An article published back in 2005 identified 1,407 species of human pathogen, of which 58% came from animals (known as ‘zoonotic’ pathogens, or ‘zoonoses’). The article noted that “zoonoses are associated with a wide range of drivers, but changes in land use and agriculture and demographic and societal changes are most commonly cited.”

Indeed last week the director of the UN Environment Programme, Inger Anderson, warned that “our continued erosion of wild spaces has brought us uncomfortably close to animals and plants that harbour diseases that can jump to humans.” Her conclusion? The long-term global response “must tackle habitat and biodiversity loss”.

If the finance sector is not paying attention, it needs to. Nature, and biodiversity in particular, has long been taken for granted. Its destruction has been seen as secondary to concerns about economic growth and a search for agricultural land to feed a growing population.

It is becoming abundantly clear that this equation is broken: that destruction of nature is starting to cost more in lost economic growth – through wildfires, droughts, floods and storms, and now, possibly, a pandemic which has led to the lockdown of more than two billion people – than it is contributing.

We need another way, and this current crisis could be the greatest opportunity we’ve got to change our relationship with nature for the better.

What can companies and investors do about this? Firstly, the current global crisis is a time to think about what needs to be done differently going forward. New business strategies need to be drawn up with a new vision of how business can be done. Investors will need to work with companies to urge them to do this, using their voting power where necessary.

Secondly, investors will need to identify those companies who are most exposed to risk, both in terms of their impact on nature, and their reliance on nature to continue to do business. These are not just long-term risks – the bankruptcy of Californian utility PG&E last year, following devastating forest fires, is evidence of the dramatic impact of nature-related events on stock prices. There are a growing number of tools which can help investors to track high-risk companies, including the Natural Capital Finance Alliance’s Encore [https://encore.naturalcapital.finance/en/] tool, which identifies the impacts and dependencies on nature for every main production process in the global economy.

Third, the finance sector should be working with governments to drive the systemic change that must now take place. That means regulatory frameworks that allow as orderly transition as possible to an economy where growth is decoupled from nature’s destruction.

Some governments are moving already. The Dutch National Bank is preparing a report on the systemic risks to the banking sector from biodiversity loss, while a number of governments have expressed interest in a Taskforce on Nature-related Financial Disclosure (TNFD), a nature equivalent of the similar Task Force on Climate-related Financial Disclosure, that would provide a framework for understanding and reporting on dependencies and impacts on nature. Furthermore, the French government has signalled its intention to incorporate biodiversity into its Article 173 which mandates disclosure from large companies on their strategic response to climate change and ESG risks.

And forward-thinking financial institutions are also beginning to act. ASN Bank has set a goal of having a net positive effect on biodiversity as a result of all of their loans and investments by 2030, and has worked with consultants to develop a tool to help them quantify their impacts on biodiversity. AXA, together with WWF France, has written a report on how to integrate nature into investment strategies and has launched a new ten-year ‘Climate and Biodiversity’ impact fund.

Action to protect nature is no longer the preserve of ethical funds and NGOs. It is the future of our economy – and of companies across a staggering range of sectors – that is at stake. It is time to act now.

James Hulse is a Senior Advisor to Global Canopy, an environmental think-tank. He is also the Founder of Hindsight Consultancy.