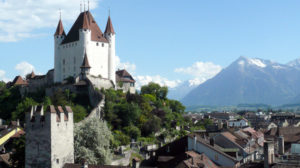 The Thun Group, an informal group of major banks focused on how the sector should adopt the UN Guiding Principles on Business and Human Rights, has clarified its position on banks’ potential to “contribute” to human rights violations, following a controversy over its interpretation of the Principles in a paper published earlier this year.

In relation to “adverse human rights impacts”, it now states, “the provision of certain financial products and services may under exceptional circumstances reach the level of contribution”, as determined by 13a of the UN Guiding Principles (UNGP). The clarification of the Group’s position came in a revised final version of the paper published this week.

In March 2017, the group (named after the Swiss town) was criticised for appearing to suggest in a discussion paper that, under the UNGPs, banks would not be considered to be ‘causing or contributing’ to such impacts through their financing activities.

Professor John Ruggie, architect of the ‘soft law’ UN Principles known as ‘the Ruggie Principles’, said at the time that he was “deeply troubled” by the Paper’s position.

RI also reported in the summer that, in response to a call for clarification around banks’ human rights responsibilities from campaign group BankTrack, the UN reaffirmed that banks can contribute to adverse human rights impacts through their finance.

The Thun Group’s revised paper has now narrowed its focus to considering only adverse human rights impacts that are ‘directly linked’ to banks through their business relationships [UNGP 13b].

It does not explore further the idea that banks may ‘contribute’ to such violations through their financing activities [UNGP 13a] – leaving it an open question.

When asked what would constitute an “exceptional circumstance”, RI was told by Christian Leitz, Convener of the Thun Group and Head of Corporate Responsibility Management at UBS that, “the paper does not…consider UNGP13a and therefore not those exceptional circumstances where the level of ‘contribution’ may be reached”.The paper also adds: “While the provision of wholesale financial products and services may under specific circumstances reach the level of contribution [13a], in an investment banking context banks are, with a sound due diligence process in place according to the criteria outlined in the Thun Group’s 2013 Discussion Paper, more likely to be directly linked to adverse human rights impacts under UNGP 13b”.

An important distinction between 13a and 13b is that business enterprises that cause and contribute to such violations [13a] are considered under the UNGPs to be liable to provide ‘access to remedy’ – through grievance mechanisms and remediation – to those affected. Yet, those that are directly linked [13b] are deemed to have less responsibility, and are expected only to try and mitigate the problem.

Leitz also told RI that the final version of the paper “has been agreed upon by the Thun Group” but that it “does not commit the participating banks to applying the entirety of its contents”.

He added that it should be viewed as a “constructive and concrete step forward” in the discussion about banking and human rights.

“We believe that the paper will further increase awareness and, above all, help to ensure a consistent, conscious and professional assessment and handling of the human rights responsibilities of banks.”

This is the third paper published by the Thun Group since it launched in 2011. The first, in 2013, received praise from civil society bodies monitoring the responsible behaviour of banks globally.