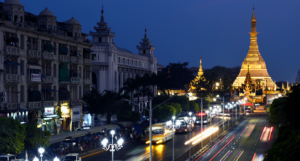 KLP Asset Management and Sycomore Asset Management will continue to engage TotalEnergies (Total) and Chevron on their exits from Myanmar, as well as their broader human rights approaches in conflict-affected and high-risk areas, RI can reveal.

On Friday, the energy majors announced they were exiting Myanmar with the French oil and gas giant saying on its website: “TotalEnergies has decided to initiate the contractual process of withdrawing from the Yadana field and from MGTC in Myanmar, both as operator and as shareholder, without any financial compensation for TotalEnergies.”

It added that it has also approached the French authorities to consider putting in place targeted sanctions that would confine all the financial flows of the various partners to escrow accounts without shutting down the gas production.

“We want to have a dialogue with Total about whether this situation in Myanmar will impact their wider approach to human rights and their identification and management of salient risks. We are especially thinking about Uganda and Mozambique” – Anne-Claire Imperiale, Deputy-head of ESG research at Sycomore Asset Management

And a spokesperson for Chevron told RI: “We have reviewed our interest in the Yadana natural gas project to enable a planned and orderly transition that will lead to an exit from the country.  We have been in discussions with the operator to understand their position.  As a non-operator with a minority interest in the project, our immediate priority remains the safety and well-being of employees, safe operations and the supply of much-needed energy for the people of Myanmar and Thailand.”

Since the nation was subject to a violent coup led by its military last February, a raft of investor action, including engagement and divestment, has been occurring.

Earlier this month, RI exclusively reported that Sycomore Asset Management, alongside 35 other investors and several NGOs, had been engaging with Total since July 2021 regarding its operations in Myanmar.

KLP Asset Management also said it was engaging with the French giant, alongside other oil and gas firms, including US-headquartered Chevron.

In response to Friday’s news, Kiran Aziz, Head of Responsible Investments at Norwegian KLP Asset Management, explained to RI: “In the light of circumstances involving human rights abuses from the junta we are pleased with [the] decision as the oil and gas sector remains one of the military government's primary sources of funding. Total Energies and Chevron are two of the world's largest energy companies and they depend on social license to operate.”

Moving forward, she said there remains a need to continue to dialogue with the pair over their withdrawal and the potential for them to withhold revenues from the military junta.

“The companies’ forthcoming departures also raise questions about the future of Thai energy company PTT, which Total described as the “natural” choice to take over the Yadana project,” Aziz cautioned.

Echoing Aziz’s points, Anne-Claire Imperiale, Deputy-head of ESG research at Sycomore Asset Management, said she welcomed Total’s announcement and added that how it finds another company to take over its operations, whilst trying to limit the impact for local employees, will be an area of attention for the French investor.

Thinking more broadly, Aziz added the duo need to strengthen their due diligence practice related to ongoing operations in conflict-affected and high-risk areas, such as Equatorial Guinea, Kazakhstan, and Mozambique.

She said that KLP Asset Management will be engaging with Total and Chevron regarding this, “given the inherent risks in the conflict- area.”

Imperiale also flagged that in the coming weeks, Sycomore Asset Management will be engaging with Total more broadly on its approach to human rights.

“In 2016, Total published its first report in line with the UNGP for Business and Human Rights, identifying its salient risks and strengthening the governance of human rights risks at Group level. What is important to us now is to identify this situation in Myanmar will impact their wider approach to human rights and their identification and management of salient risks. We are especially thinking about the current exposure of the Group to human rights violations risks in Uganda and Mozambique.”

She added that Sycomore will propose these engagements with Total be done as part of its coalition. “But we need to talk with the other investors on this first.”

In response, a spokesperson for Chevron told RI: “We share the desire for lasting solutions in Myanmar. As we transition our role in Myanmar, we will continue to engage constructively with governments, responsible business, and civil society.”

At the time of publication, Total had not responded to RI’s request for comment.