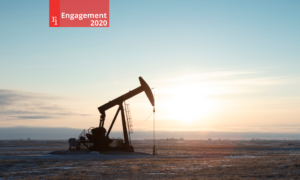 This article is part of the RI Engagement 2020 series, taking a look at the current state of play for shareholder engagement and ESG, and reflecting on its future. Click here to see all the articles published in the series so far.

As the pressure mounts to prevent catastrophic levels of climate change, many investors have staked their hopes on engagement: stewarding listed companies –  oil & gas majors in particular – towards Paris-alignment, within a painfully narrow timeframe.

Recent ‘net-zero’ ambitions by the most progressive oil majors, such as Shell, are welcomed as positive signs by these investors that momentum is building; that engagement is working. But others are less convinced, viewing the pledges substance-free, and lacking any meaningful commitment to transition.

Behind the argument for engagement is the belief that, although extremely complex and difficult, it is possible for at least some oil majors to transform their business. But does history support that view? Do incumbents faced with an existential threat to their business model adapt and emerge transformed? Or do they obfuscate, delay, and then, ultimately, fall?

Historically there has been a “phenomenal” churn of companies during industrial transitions, says Keeley Wilson, Senior Researcher at French business school Insead, who has written extensively on why companies fail.

Most companies do not adapt in the face of threats to their industry, she says, but “tend to keep hanging on and then ultimately fail”.

Relatively recent cases of this can be seen, she says, at mobile phone pioneers Nokia, Ericsson and Motorola, which dominated the market in the 90s before being completely eclipsed by new entrants such as Apple with game-changing smartphone technologies.

Kodak and Polaroid are other examples, in this instance failing to respond to the emergence of digital photography despite, in the case of Polaroid, recognising the threat as early as 1985.

Often these big incumbent businesses have too much “sunk cost” in the old business models and ingrained ways of thinking, Wilson says, to be agile enough to respond to big changes. She talks about the “time lag” between the crisis and the strategy that brought it about, which is usually set “a long time in advance”, leaving management tied to decisions made years ago by predecessors.

“It's very, very difficult for companies to transition from being big and dominant and doing what they do because quite often it’s going to require them to cannibalise their business, and not many are prepared to do that”, Wilson tells RI.

There are exceptions, though. Ørsted, the Danish energy giant – formerly called Dong Energy, or Danish Oil & Natural Gas – miraculously transformed from being one of the country’s biggest polluters to a global wind power giant in just 10 years.

The fact that Ørsted made its transition before going public in 2016 is important, says Wilson, who suggests that it is much easier to make a huge strategic shift if you are a private company with concentrated, supportive owners. For Ørsted, that was the Danish Government, which still owns 50.1% of the company.

In 2009, Dong Energy's heavy emissions were something of a political embarrassment, representing a stain on the green credentials of Denmark, and prompting the highly successful plan to overhaul the company.

Wilson believes that it is going to be much more difficult to perform such a feat if you are a big listed company, because of the “contradictory and conflicting demands” of shareholders.

She points to the recent departure of Isabelle Kocher, CEO of listed French energy giant Engie. Kocher sought to position Engie, whose largest shareholder is the French Government, at the vanguard of the green energy transition, selling off coal and gas assets and investing in renewables and energy efficiency.

But a weakened share price caused alarm among the energy giant’s board, who quickly lost faith in the strategy, resulting in Kocher’s contract not being renewed earlier this year.

Wilson tells RI: “It was really interesting because here was a company where somebody was actually doing the transition that they all talk about and shareholders didn’t like it because they didn’t want their own interests to be harmed, even over a relatively short period of time”.

She compares this with the support and time IBM gave former CEO and now Chair, Ginni Rometty to oversee a painful but ultimately successful reorganisation at the US technology giant between 2012-18.

“Ginni Rometty got the board and shareholders behind her for this terrible journey of appalling results for something like 15 consecutive quarters before she turned it around. I don’t think most shareholders are prepared to stomach that.”

Natasha Landell-Mills, Head of Stewardship at Sarasin & Partners is more optimistic when it comes to the potential for oil & gas companies to transition.

It's possible, she says, because “they could just stop investing fossil fuels and reinvest into clean energy”.

Once you accept that premise, the more important question is how to achieve it, she says. One of the biggest challenges Landell-Mills identifies is that “economic incentives” are not currently pushing oil majors to shift towards decarbonisation, as government policies have yet to be implemented that will drive them to respond sufficiently.

Regardless, she says, the Paris Agreement “sets a very, very clear direction of travel of governments”, one which it would be “imprudent and illogical” for companies to ignore in their investment decision making – especially considering the lifespan of fossil fuel projects, which can run into the decades.

Landell-Mills stresses the importance of investors challenging oil & gas companies on their accounting assumptions – what she refers to as “not on most investors’ radar”  – and whether or not they are factoring in impairments that arise as a result of decarbonisation, which is something Sarasin has coordinated engagement on with companies like BP, Total and Shell, with some success.

When decarbonisation is not integrated into company numbers, Landell-Mills says, it is unlikely capital will move away from fossil fuels in a meaningful way. A key part of addressing this is getting companies to include commitments to Paris alignment in their articles of association. Once that happens, she says, shareholders can insist that audits, accounting, remuneration and capital expenditure be aligned with that goal.

Much of the debate around the meaningfulness of companies’ commitment to transitioning away from fossil fuels would disappear if climate risk was embedded in accounting, Landell-Mills says.

“It’s not a technical, geeky issue, this is absolutely at the heart of everything: if you have Paris-aligned numbers, you would get Paris-aligned strategies”.

But while Landell-Mills believes that transition to low-carbon businesses is possible for oil & gas companies, she is clear that it will be a “painful” process for some.

“You can't get away from that fact that we’re talking about companies winding themselves down over time and then going into new areas where, frankly, they may not necessarily be successful”.

Signs of the transition?

If transition is a possibility, are we seeing any signs that oil & gas companies are taking it seriously?

Kingsmill Bond, Energy Strategist at think-tank Carbon Tracker tells RI that “a lot of the stuff we see is just people trying to figure out ways to basically continue more or less doing what they're doing”.

The dependency on carbon capture and storage in many of the oil majors’ transition strategies is a concern touched on by Landell-Mills, who says that the economics alone of such a strategy make it “totally unviable unless you have massive government support”.

Bond says that the “key issue” in assessing whether companies are transitioning is where they are investing their money. Earlier this year, the International Energy Agency (IEA) found that investments in low-carbon businesses represent less than 1% of oil & gas companies capital expenditure.

It is obvious, Bond says, that “you can't transition from state A to state B by spending 1% of your capex on state B”.

Last month, a report by HSBC on European oil majors’ strengthened climate commitments noted they didn’t constitute a “play” on the energy transition yet – just a means to “remain ‘investible’, buying them time to “demonstrate they can be seen as facilitators of change in the energy transition”.

Piet Sprenger, Manager Sustainability Strategy at Dutch bank ASN Bank, who is also sceptical, says there should be a much more “honest discussion” about introducing “retirement strategies” for oil & gas companies, whereby assets are wound down and cash is returned to shareholders rather than reinvesting in new projects.

“All these years of engagements with the oil & gas sector and it did not lead to a start of the transition. I don’t see it happening now”, he concludes.