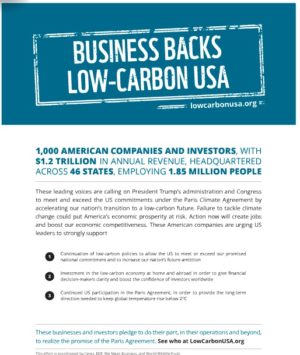 California pension giants CalPERS and CalSTRS and their New York peers are among 1,000 investors and corporates that have today taken full-page ads in US newspapers including the Washington Post urging President Trump to support low-carbon policies and stay in the Paris climate accord.

There are more than two dozen Fortune 500 companies on the list.

The ad states: “Dear President Trump, Members of the US Congress, and Global Leaders: We, the undersigned members in the business and investor community of the United States, re-affirm our deep commitment to addressing climate change through the implementation of the historic Paris Climate Agreement.

“We want the US economy to be energy efficient and powered by low-carbon energy.

“Failure to build a low-carbon economy puts American prosperity at risk.” The signatories also “pledge to do our part, in our own operations and beyond” to realize the Paris Agreement.The names involved range from adidas and Adobe to Zevin Asset Management and ZipPower via the likes of DuPont, eBay, Johnson & Johnson, Nike and Pacific Gas and Electric Company.

But it’s a moot point whether the Trump administration will take any notice.

The ad runs in the same Washington Post that is reporting that Trump could be set to issue a sweeping executive order to reversing Obama’s climate policies.

“Failure to build a low-carbon economy puts prosperity at risk.”

Also in the paper is a story that former aides of Oklahoma Senator James Inhofe, a climate sceptic notorious for bringing a snowball into the Senate, are filling the upper echelons of the Environmental Protection Agency (EPA), now headed by his friend and fellow climate change denier Scott Pruitt.

The campaign is the latest sign of investor resistance to the Trump agenda. In February, for example, a group of 64 SRI and faith investors and human rights groups issued a strongly worded letter to companies calling on them to resist Trump’s controversial executive order restricting entry for refugees, immigrants, and documented residents from selected countries.