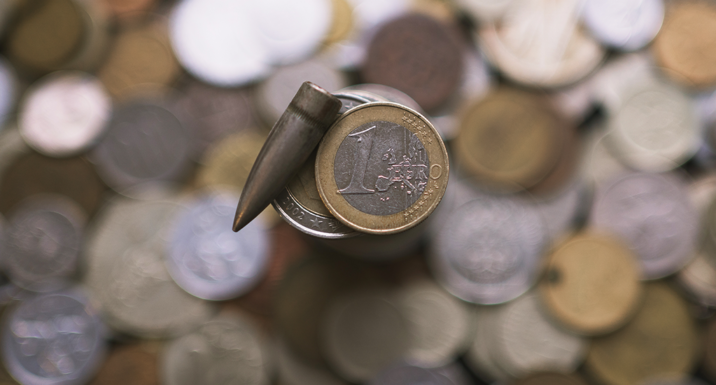 European investors are receiving mixed messages from policymakers on whether they should support the defence industry, with the EU Council now set to agree that “measures should be taken” to bolster the sector’s access to private capital.

According to documents seen by RI, the Council – which represents the EU’s 28 member states – is considering ways to push investors to allocate more capital to defence in light of Russia’s invasion of Ukraine, despite sustainability experts saying the industry undermines the bloc’s social objectives.

A draft report to be agreed upon by the Council later this week reads: “Measures should be taken by the end of 2022 to promote and facilitate access to private funding for the defence industry.” It added that the EU should make “best use of the possibilities offered by the European Investment Bank,” but does not provide further details.

The EIB acts as the funding arm of the European Union and has been vocal in its support for, and adoption of, the EU’s sustainability taxonomy. EIB representatives sit on the EU’s Platform on Sustainable Finance, which is developing official guidance on which economic activities are aligned with Europe’s social and environmental objectives. Earlier this month, one of the Platform’s chief advisors told RI that investments into weapons would not be compatible with the EU’s social objectives.

Antje Schneeweiß, managing director at German church investor Arbeitskreis Kirchliche Investoren and social taxonomy rapporteur, rejected the idea that armaments could be considered socially positive, saying that “only investments in activities that promote the rights enshrined in [international principles such as the UN Guiding Principles on Business and Human Rights]… can be called ‘social’”.

“It follows… that armaments cannot be classified as social – such inclusion cannot be justified by any of these documents.”

Her comments came in response to Hans Christian Atzpodien, head of the German weapons industry body, claiming: “The invasion of Ukraine shows how important it is to have strong national defence. I appeal to the EU to recognize the defense industry as a positive contribution to ‘social sustainability’ under the ESG taxonomy.”

Some investors are rethinking their approach to arms in light of the developments. Earlier this month, Swedish asset manager SEB Investment Management updated its policies to enable six of its funds to invest in arms for the first time.

“It is SEB Investment Management’s view that investments in the defence industry are of key importance to uphold and defend democracy, freedom, stability and human rights. At the same time, it is important to keep in mind that many of our customers and unit-holders still do not want to invest in the defence industry, and therefore going forward many of our funds will continue to exclude such investments,” a spokesperson told RI.

“In recent weeks, there has been a debate evolving around the importance of defence, which most people recognise,” he said. “However, it is not an investment management company’s responsibility to equip national defences – that’s a political decision, which does not happen by investing in companies on the stock market. It is possible that the general debate right now might not be nuanced enough.”

“Approaches to sustainability and integrating it into fund management differ between companies and even from fund to fund offered by the same company. This is also the case with investments in weapons and military equipment. However, there is long history of considering excluding investment in such companies as a basic standard by funds that label themselves as ‘sustainable’ or ‘ethical’.  That is why transparency is so important.”

Beyond Europe, Jamie Bonham, director of corporate engagement at Canadian responsible investor NEI Investments, told RI that its position, which includes excluding companies that derive a material portion of their revenue from the manufacture of legal weapons systems from funds designated RS, would remain in place because “all the same concerns that led us to our position are still there.”

Among those concerns, he said, was the issue of who defence companies sold their products and services to. “We’ve had significant concerns about the lack of filter from the industry on who can buy from them,” he said, adding: “Today, [weapons could be used to] support Ukraine, tomorrow they could be supporting an autocratic regime.”

Dutch investor Aegon Asset Management told RI it doesn’t plan to revise its exclusion of controversial weapons and the arms trade, but a spokesperson said: “This is an interesting area of discussion and one that requires further consideration and potential consultation over the longer term.”