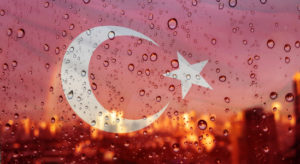 President Erdogan has threatened to end the migration pact with the EU in response to the recent non-binding vote in the European parliament urging governments to freeze EU accession talks with Ankara. This episode underscores the sharp deterioration in relations between the EU and Turkey, especially after the failed coup attempt in July. More generally, it is a reflection of a wider malaise affecting Turkey’s country sustainability performance, which has suffered a steady decline in recent years. As of October 2016, the country belongs to the bottom 10 performers with an overall ESG score of 3.81 and a rank of 55. This represents a decrease of 0.65 in their ESG score and slide of 11 ranks from September 2013. Considering the most recent political developments – not yet reflected in most data – there is currently no indication of a turn for the better but rather the risk of further erosion of Turkey’s sustainability profile.

Weakening public governance
Turkey’s governance performance and institutional framework have clearly been affected by disruptive politics and Erdogan’s tightening power grip. This becomes obvious when looking at the decline in the World Bank’s six Worldwide Governance Indicators over the past five years. Turkey’s political risk and social unrest indicators have suffered as well measured by a worsening in its Fragile States Index score from 75.9 to 77.3 (the higher the score, the greater the instability). Instability and unrest have been exacerbated by a myriad of factors including: an increasingly authoritarian policy course, the massive inflow of Syrian refugees, terrorist attacks, Islamic State threats and the alleged end of the peace process with the Kurdistan Workers’ Party (PKK). These developments have also led to a deep divide between the pro- and anti-government groups that is manifest in all spheres of economic, political and social life—a chasm which is on course to widen with time.

The after-effects of the failed coup in July are aggravating the already delicate political situation. President Erdogan has responded to the failed coup by intensifying his long-running purges of police, military, education, business as well as those of political sympathizers (like those of the Gülen movement), leaving practically no segment of public or private sphere untouched. The crackdown will further weaken the country’s institutions and is already visible. An observation that has also been stated in the EU 2016 Progress Report published on November 9, noted that there has been a relapse in important areas such as fundamental civil rights, democracy, press freedom and rule of law.The AKP (Justice and Development Party) has also renewed its push for a presidential system that would involve a transfer from executive powers to the president. Moreover, Erdogan has confirmed he will ask parliament to consider reintroducing the death penalty as punishment for the plotters behind the failed coup—a step that would be virtually tantamount to ceding the country’s EU membership ambitions.

Persistent gaps in Turkey’s ESG profile
The clampdown of the country’s institutions is all the more tragic given that the solidity of the governance framework is a key driver of business performance, economic success and social cohesion. Turkey already lags all OECD countries in terms of perceived quality and performance of governance and will now fall further behind its peers. Significant gaps with OECD benchmarks can also be identified in other sustainability factors. True, some progress has been made in the social area, such as a reduction in absolute poverty and improvements in education. However, average household disposable income per capita is still slightly below 50% of the OECD average, working conditions are below OECD standards and income inequality remains high as compared with OECD peers.

Moreover, gender disparities are pronounced with low female representation in parliament and large gender pay gaps. Turkey’s record on environmental, energy and urbanization issues too, compares rather poorly vis-à-vis other OECD countries. Air and water quality are far below OECD averages, and GHG emissions per capita – while still fairly low – are rising rapidly. Competition for water across sectors will grow further as a result of ongoing urbanization and the increased irrigation needed for agricultural expansion. Confirming these trends is Turkey’s performance in the 2016 Environmental Performance Index. Turkey ranks at the bottom of OECD members with an index value of 67.68, markedly below the average of 85.50 for this group. However, positive trends are also visible. Public awareness of environmental and climate change issues appears to be rising and public expenditures in some of these areas have been increasing in recent years. Moreover, Turkey is more or less in line with EU environmental legislation. But, as is the case with many other emerging economies, enforcement is a major weakness as environmental protection is still widely perceived as an obstacle to economic development.