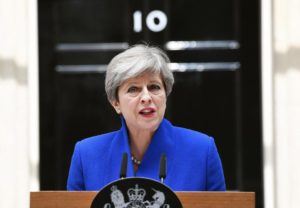 As Theresa May seeks to form a government after failing to win a majority at yesterday’s election in the UK, what are the implications for responsible investment?

Speaking today, she said she aimed to “ build a country in which no one and no community is left behind”.

One of May’s signature ideas was to put workers on corporate boards, an idea that now, although in the manifesto, seems all but dead and buried. Only the much-maligned Sports Direct has ever put one of its workers on its board.

Vince Cable, who did so much to promote stewardship when he was Business Secretary in the coalition government of David Cameron, is back as an MP having won back his old Twickenham seat. Though it is, to say the least, highly unlikely that Cable, who was last year appointed chair of a social enterprise called HCT Group, will have any ministerial role this time round.

Speaking of Cameron, his ‘Big Society’ idea recedes ever further into the rear view mirror, although Big Society Capital is still going strong as an independent organization. One casualty of the election was Rob Wilson, the minister for civil society who frequently claimed the UK social impact bond market would grow to £1bn. Wilson, whose department pushed social pensions, lost his seat to his Labour rival.

The Inclusive Economy Unit that was set up last October had been overseen by Wilson.

Another luminary from the past, former Energy and Climate Change Secretary Ed Davey, like Cable, also won his old seat back.

What the uncertainty means for London’s green finance hub plans is anybody’s guess at this stage, but one thing is certain: the hands of Paris, Luxembourg, Frankfurt, Dublin etc to become sustainability investment centres are strengthened by the political vacuum in the UK.

The contrast with new French President Emmanuel Macron, who has actively engaged with the French SIF (Forum pour L’Investissement Responsable: FIR) – saying banks and life assurance companies should offer sustainable funds – could not be more marked. Just weeks ago the Frankfurt stock exchange launched its bid to become a hub for sustainable finance, underlining how the race to become Europe’s green investment battle is intensifying.

One of the initiatives of former Chancellor (Finance Minister) George Osborne was to set in train the pooling of local authority pension fund assets – a potentially huge lever of ESG, given the large assets involved.RI understands that the Treasury under May has been a lot less focused on this issue, and will be even less so given the current political turmoil and the Brexit negotiations. But pooling is going ahead nonetheless, with or without close government oversight.

The Conservative manifesto (which is now being described on social media as the ‘longest suicide note in history’), was quite heavy with corporate governance, speaking of fairer corporate governance and new rules for takeovers and executive pay. One proposal was for legislation to make executive pay packages subject to strict annual votes by shareholders. And listed companies would also have to publish the ratio of executive pay to broader UK workforce pay. An incoming Tory administration would also look at share buybacks, “with a view to ensuring these cannot be used artificially to hit performance targets and in ate executive pay”. Whether any of this will now happen is an open question.

The Conservative manifesto also included a commitment to create wealth funds known as Future Britain funds. “We anticipate early funds being created out of revenues from shale gas extraction, dormant assets, and the receipts of sale of some public assets. We will encourage pension funds with an interest in joining Future Britain funds to do so.”

The document also committed to taking a lead in global action against climate change, as the government demonstrated by ratifying the Paris Agreement.

May, in her previous role as Home Secretary, oversaw the groundbreaking Modern Slavery Act. “We now need to go further,” the manifesto states. “We need to focus on the exploitation of vulnerable men, women and children for their labour, people who are moved around our own country and between nations, as if they were not human at all.”

For its part, the Labour manifesto spoke of a £250bn National Transformation Fund, as the lynchpin of an industrial strategy that will support industries such as renewables. There was also to be a new National Investment Bank and legislation to create a proper legal definition for co-operative ownership.

The party, headed by left-winger Jeremy Corbyn, said it would ensure that trade agreements cannot undermine human rights and labour standards, and that UK Export Finance support is not available to companies engaged in bribery or corrupt practices. It would also ensure that 60% of the UK’s energy came from zero-carbon or renewable sources by 2030.