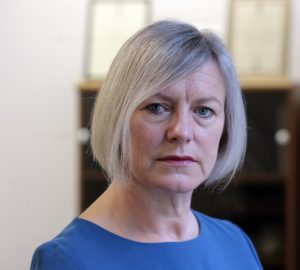 When the UK’s Modern Slavery Act came into force in 2015, it was the first legislation of its kind globally. Seven years on, however, the outgoing independent anti-slavery commissioner warns that the country risks falling behind faster-moving global peers, particularly with regard to financial institutions.

According to UK charity Unseen, around 40.3 million people globally are living in modern slavery and 24.9 million are in forced labour.

The UK act – which requires businesses with an annual turnover of £36 million ($47 million; €43 million) or more to disclose each year what action they have taken to ensure there is no modern slavery in their business or supply chains – is set to be amended by the government this year.

Dame Sara Thornton, who took over as commissioner in 2019, hopes this will include clarification of the obligations of financial institutions. Over the past two years, she has advocated for Section 54 – which requires commercial organisations to prepare a statement – to be amended to explicitly cover investment portfolios.

“Finance is the lever by which the entire global economy can be moved,” she tells RI. “It is the responsibility of institutions to do due diligence before they lend and invest.”

Indications suggest that the industry’s record to date is patchy at best. A report by WikiRate, Walk Free and the Business and Human Rights Resource Centre found that just 27 percent of 79 assessed asset managers disclosed conducting some form of due diligence on human rights or modern slavery in their portfolios.

Similarly, in a review conducted last year of 55 UK financial institutions, Thornton found that while nearly all of the 44 respondents were legally compliant with the act, “not all linked their statements to a culture of continual improvement or internal engagement, and fewer still suggested that their statements addressed anti-slavery activities in their investing and lending portfolios”.

As well as improving portfolio disclosure, Thornton believes the financial sector needs to do more to combat modern slavery, including monitoring and reporting illicit financial flows and ensuring financial inclusion.

“Having spoken to lots of survivors, it makes you realise if someone has controlled you, then they have controlled your access to your bank account, your access to credit and ability to save,” she says. “You are excluded from things we take for granted like hiring a car, having a mobile phone and accessing financial services.

“Thankfully, the financial institutions and banks I have spoken to have been great at thinking about what they can do to include people who won’t be able to fulfil the usual criteria.”

She also notes that modern slavery and trafficking are financially motivated crimes. “Once you think of it in these terms, people who want to make money will have connections to the financial sector, so actors in the industry have a main role to play,” she says.

“Finance is the lever by which the entire global economy can be moved. So, it is the responsibility of institutions to do due diligence before they lend and invest”

Since publishing her review, Thornton has been actively engaging financial institutions, including her office sitting on the Advisory Committee of the CCLA created and convened Find It, Fix It, Prevent It project to support the initiative’s engagement with other investors.

Some are already taking action. This week Rathbones launched the third iteration of the Votes Against Slavery engagement initiative.

Backed by investors representing £9.6 trillion, for 2022 the initiative is targeting 43 FTSE 350 companies that are currently failing to comply with Section 54 of the UK’s Modern Slavery Act.

Thornton is encouraging institutions to comply with Section 54 voluntarily. “Although there has been a willingness, some have raised the concern that there is a tension with client confidentiality, so they need the protection of the legislation to make it clear this is not an issue,” she says.

She is also targeting the insurance sector. While noting that uptake of marine cargo clauses – which require shippers to ensure their cargoes do not include goods made by forced labour – has been “pretty good”, she believes insurers could do more to tackle modern slavery.

“Now we want to say to the insurance sector that it’s not just about putting exemption clauses like this in insurance policies, it’s about how you can use your leadership to encourage the right sort of due diligence and behaviour. The insurance sector is central – if you can’t insure a business, then you cannot finance it.”

Looking at the private sector more broadly, Thornton is working with the Financial Reporting Council and Lancaster University to analyse the modern slavery statements of 100 major companies, including financial institutions. The work focuses particularly on how firms assess risk and measure the effectiveness of how they deal with it.

“I hope my successor will really push for this and the legislation to be updated to make a difference, because at the end of the day this is about business and economic models which lead to the exploitation of people”

In terms of policy advocacy on Section 54, Thornton has sent letters to the Treasury and the Home Office but is waiting for them to respond. She added that she understands they will be concerned about what the downsides of the classification are, and what the potential pushback might be from business.

In the meantime, Thornton warns that the UK risks lagging behind other countries on modern slavery. She notes that Australia’s legislation in this area is clearer and addresses the issue of investing and lending portfolios. “And in Canada and New Zealand I know there are active debates on modern slavery acts, but it’s not clear if financial portfolios will be included. I hope they follow the Australians.”

As to whether the UK needs to implement an equivalent of the EU’s planned human rights and environmental due diligence directive, Thornton is less certain.

“Secondly, I don’t quite understand how you can have a law on transparency and then a law on due diligence with penalties if you get found out. The reason I say that is we know most supply chains are tainted by slavery, so let’s encourage everyone to look for it, fix it and to be open about it – we’re still trying to encourage people to do this transparently. So, if you suddenly switch to due diligence, I’m not convinced yet that it’s a complementary approach.”

Thornton will officially leave her position on 30 April. Reflecting on her time as commissioner, she sees an additional change that needs to be pushed by her successor – as yet unnamed – alongside the amendment of Section 54.

“There is definitely a willingness to tackle the issue of modern slavery by the private sector – particularly financial institutions – but I think there is frustration by the lack of a level playing field,” she says. “There need to be penalties for not doing modern slavery statements. Right now, there’s too much carrot and not enough stick.

“I hope my successor will really push for this and the legislation [Section 54] to be updated to make a difference, because at the end of the day this is about business and economic models which lead to the exploitation of people.”