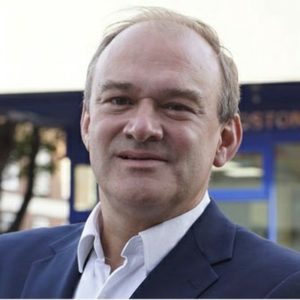 The UK’s former Secretary of State for Energy and Climate Change, Ed Davey, has called for mandatory disclosure for all pension funds and pension trustees on their compliance with the Paris climate goals as part of a five-point “decarbonise capitalism” plan.

The call came during a debate in Westminster about climate risks faced by pension funds.

The plan, which aims to redirect capital invested in fossil fuels to finance the green transition, also calls for new accountancy rules for carbon intensive assets, such as coal and petroleum, which will involve a write-down of their valuation to zero post-2050.

Under the plan, energy companies would have to disclose the amount of carbon in their business plans and reserves. Companies would also be legally required to have a strategy for alignment with Paris together with timed emission targets.

There would also be new powers for financial regulators and the Bank of England to penalise investment funds for insufficient climate risk management; the government would also develop a register of low carbon and green investment opportunities.

Davey, of the opposition Liberal Democrats, said: “This policy is very radical but also very practical. You can’t just ask for divestment without showing alternatives for that capital.”

Also speaking at the debate was pensions minister Guy Opperman, who criticised long-held perceptions among pension trustees that the environmental policies of portfolio companies were irrelevant, saying that they were “utterly wrong”.

He said: “There are real financial risks resulting from climate change. With the long-term horizons of pension investing, trustees must now consider that when they set out their investment strategies.“Trustees who do not consider those matters will be breaching their statutory and potentially their fiduciary duties not only to current but future members.”

The debate took place a month after trustees of the UK parliament pensions fund, the Parliamentary Contributions Pension Fund (PCPF), announced that it will heed a government regulations requiring pension funds to incorporate climate risk into their Statement of Investment Principles (SIPs) by October.

This has been framed as a victory for a longstanding cross-party campaign among MPs to divest the PCPF from fossil fuels after it was revealed in 2017 that BP, Shell and Rio Tinto were in the £671m ($848m) fund’s top 20 holdings.

Nationally, the ruling Conservative government has made making London a green hub a political priority. The state-backed green policy centre, the Green Finance Institute, is due to publish a strategy paper for the UK’s green finance market later this year after recently appointing a chief executive.

Speaking to RI in advance of the debate, Davey said: “I’ve come to the realisation that we are making significant advances in the development of technology to decarbonise. However, the biggest barrier is a financial one. A policy framework will help address encourage those who still haven’t properly considered the increasing risks of fossil fuel investments and increasing attractiveness of green investments.

“I am not one of the people pushing for immediate divestment from fossil fuels tomorrow. There is a case to be made for holding just enough stock to allow for corporate engagement but you should definitely not invest billions of pounds in assets which will inevitably be stranded in the future.”