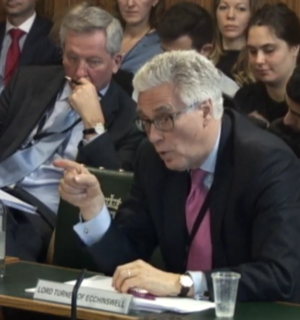 Lord Turner, the public policy and finance figure, has told a Parliamentary committee that corporate climate disclosure needs to be made compulsory – which would help investors like pension funds to make informed decisions.

Turner was speaking before the Environmental Audit Committee which is taking evidence on green finance. See RI’s earlier coverage here.

Turner, who is the former head of the Financial Services Authority and UK Climate Committee and who has been involved with environmental data body CDP for many years, said it “makes sense” to make disclosure mandatory.

“We are developing a structure of reporting,” he told MPs. Although some of the developments weren’t perfect he said “it makes sense to make it compulsory not voluntary”.

“If you think this is a valuable thing to do you should eventually move to compulsory.” The CDP, he added, has “punched massively above their weight for 20 years”.

Companies needed to say how compatible they were with the Paris climate agreement, to enable shareholders to have an “intelligent conversation” with them.The questioning moved on to the role of pension funds, investment mandates and fiduciary duty.

Turner said there was no “magic answer” to systemic short-termism and that long-term investors will just have to “ride out” short term issues. “You can be right over five years but wrong over six months.” But, displaying admiration for the vision of Tesla’s Elon Musk, Turner said: “There’s no lack of long-termism in his investors.”

After a long career spanning public policy and finance, Turner took over as European chair of insurer Chubb Europe and has been a director of the UK’s Prudential since 2015. He is also currently Chair of the Energy Transitions Commission and the Institute for New Economic Thinking.

Asked about pension funds, he said: “The single biggest thing we can do to help them is on the transparency and disclosure side.”