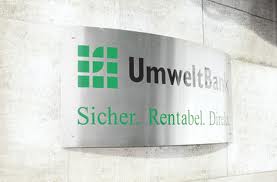 It’s emerged that the management of Umweltbank, a German bank founded in 1997 to fund environmental projects, has not been ‘discharged’, or approved, for 2013 after the bank failed to include on the agenda for its 2014 annual general meeting (AGM) a counter-proposal critical of its management.

Nuremberg-based Umweltbank has emerged as a major green financier: as of December 2014, the bank had made €2.8bn worth of loans, with 80% going to finance renewable and energy efficiency projects. It reported pre-tax earnings of €44m for last year.

The bank originally listed its shares in Frankfurt but they are now traded over-the-counter in Munich. According to the bank, 84% of the shares are in free float, with many of them held by the bank’s clients and employees. An investment firm called “UmweltVermögen Beteiligungs (UVB)” is the bank’s single biggest investor, holding 15.6% of the share capital. UVB is said to be controlled by Umweltbank founder and CEO Horst Popp, but the bank declined to confirm this.

Prior to Umweltbank’s 2014 AGM, a single shareholder filed a counterproposal seeking to deny Popp and fellow executive Jürgen Koppmann what’s known in Germany as discharge, or approval of activities in the prior year.

The shareholder, a professor, argued that Popp had botched an investment the bank had made in a wind park, while Koppmann was resisting more disclosure about the risks associated with green investments.But on the advice of the company’s lawyer, Umweltbank elected to simply omit the proposal from the agenda. Asked about this, the bank said: “Our lawyer was of the opinion that because the counterproposal did not relate to a specific point already the agenda but instead called for the denial of discharge, we could leave it out.”

Accusing the bank of violating German securities law, the shareholder filed a lawsuit with a Nuremberg court. Said the bank: “Again on the advice of counsel, we decided to acknowledge and publicise the shareholder’s complaint instead of fighting it in court.” The upshot is that Popp and Koppmann were denied discharge for 2013, though the bank says this has no legal consequences for their continued employment. Even so, Umweltbank has not clarified Popp and Koppmann’s current status on its website. Instead, the bank simply reports that two men were discharged with around 96% of the vote during the 2014 AGM.

Umweltbank’s actions have led the German Association of Critical Shareholders (DKAA), which supported the shareholder’s lawsuit, to blast the bank’s governance. “As a publicly-traded firm, Umweltbank has an obligation to uphold securities laws and be transparent to its shareholders and clients,” said DKAA Managing Director Markus Dufner, adding: “Not even Deutsche Bank would do something like that.” The DKAA is known for specialising in counterproposals denying discharge of executives at Germany’s biggest listed firms on ethical or environmental grounds.