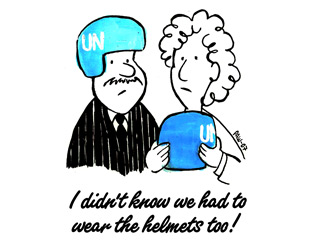 In the last few days, 195 of the world’s largest institutional investors representing about $9 trillion (€6.6bn) in assets, have received the equivalent of an electronic ‘envelope’ containing a score that measures their success in implementing the UN Principles for Responsible Investment (UNPRI). Some will have taken their time to look inside, hesitant about the contents. Others will have ripped it open to see whether their hard work in implementing responsible investment standards has been rewarded with a good grade.
Launched a year ago in New York and Paris with 65 signatories, the UN PRI has grown rapidly, underlining investor interest.
Its aim is to mainstream responsible investment by giving investors six targets for integrating environmental, social and governance (ESG) issues into investment decisions.
Investors being scored are a who’s who of the world’s biggest pension funds: CalPERS and NYCERS in the US, ABP and PGGM in the Netherlands, Denmark’s PKA, the Universities Superannuation Scheme in the UK, France’s Fonds de réserve pour les retraites (FRR) and Sweden’s state pensions buffer funds, AP1, 2 and 3. Additionally, few of the world’s largest fund managersare missing from the roster.
The scores, produced annually following a detailed survey by Mercer, the investment consultant, look set to become the benchmark against which investors assess responsible investment; a GIPS equivalent (Global Investment Performance Standards) for the SRI domain. The ranking is anonymous.
Investors taking their first steps in responsible investment might be relieved it is should they score low.
Each signatory will see performance compared to their peer group – either asset owner or asset manager – but with no classification by company. Signatories will be top, mid or bottom bracket performers against each of the principles. Neither will the results be made public by the UNPRI. Signatories may reveal the findings to their beneficiaries such as pension fund members. The PRI is recommending they do. Significantly, the survey asks investors and fund managers to look at ESG issues across all investment portfolios not just SRI funds. It says this should rebalance any bias towards specialist SRI managers. The aim of the scorecard is to introduce competitive incentives to the integration of responsible investment. It is by no means the meat of the UN review
of the principles, which offers ‘best practice’ progress comparison on the principles ranging from drawing up responsible investment manifestos to including ESG criteria in investment mandate proposals (RFPs). But, at the anual meeting of signatories to the UN PRI in Geneva last week, the scorecard exercised minds the most. The PRI decided to release the results after the conference in case it dominated the event. One telling question was whether asset managers would begin using their UN PRI ‘score’ as a marketing tool. A signatory said: “There is a fear that this could undermine the principles. The issue is that the filling out the questionnaire is voluntary and self-regulated, which could open it up to misinterpretation.”
Jane Ambactsheer, global leader for responsible investment at Mercer, said the questionnaire had been developed in collaboration with investors and fund managers: “It is an indicative not an absolute scoring system and this should be emphasised when looking at it. It is not a formal stamp of approval.”
Nada Villermain Lecolier, head of manager selection and SRI at the €32bn French reserve fund, welcomed the scorecard. She said pension funds needed quantitative evidence with regards to fund manager commitment on ESG issues to be able to make informed mandate decisions.
She said the FRR was likely to publish its own PRI score but would probably wait for three years of results in order to give what she said would be “consistent information”.
Michael Musuraca, a trustee with the New York City Employees Retirement Scheme (NYCERS) and member of the PRI board, said:“We were sensitive to the scoring issue. We didn’t think that everything would be hunky dory and that we would meet once a year and show how good we are. This is a first step that should encourage investors to get more “granular” with the results and start asking more not fewer questions.”
Away from the scorecard, the most promising aspect of the PRI review is that 83% of investment manager signatories and sixty seven per cent of asset owners – pension funds for the most part – have adopted formal policies on responsible investment.

“It is an indicative not an absolute scoring system.”

“This is a first step that should encourage investors to get more “granular” with the results.”

Few, however, said they measured investment performance or calibrated manager fees with ESG issues in mind. This is important because ESG issues can often take years to filter into share price performance and fund managers have tended to invest according to short-term quarterly and annual performance hurdles which have become the norm in pension fund management.
Questioned on the disclosure of their PRI results that signatories would make to beneficiaries, 42% of asset owners said they reported integration progress with PRI to their fund members.