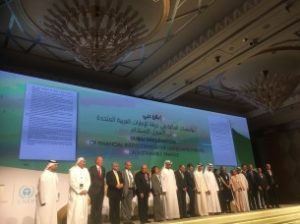 Financial institutions in the United Arab Emirates (UAE) have signed a newly founded “Dubai Declaration” on sustainable finance committing them to broad ESG integration and green finance within their investment in line with the UAE’s Green Agenda 2015-2030. The Declaration was unveiled at the UNEPFI Global Round Table in Dubai, United Arab Emirates, on October 25, by His Excellency Dr Thani Al Zeyoudi, ‪Minister of Climate Change and Environment. In a keynote, Al Zeyoudi said the UAE had ratified the COP21 agreement and set a target of generating 27% of energy from clean sources by 2021 under its Nationally Determined Contribution (NDC).‬‬ UAE’s green agenda for growth, he said included a Green Finance and Investment Support Scheme to promote Islamic green bonds and develop energy saving companies (ESCOs) for real estate assets. To achieve its targets, he said a large number of private sector green projects will need to be financed. He said domestic finance institutions were showing willing: a survey in 2015 of 79 institutions revealed that 38 were providing ‘green and sustainable financing products’, and a further 32 said they would. Among a raft of green initiatives launched in the UAE, Al Zeyoudi said the establishment of an AED100bn (€24.9bn) Dubai Green Finance Fund last November could be increased and broadened in geographical investment reach.
On the opening plenary, titled ‘Opening doors, financing sustainability’ Dr Nadia Makram Ebeid, former Minister of the Environment in Egypt and now Member of the Board at Commercial International Bank, said one of the challenges of sustainable finance was how to get people to “buy into”the increasing evidence that responsible business and finance are profitable, and that conversely the cost of environmental degradation is “important”. Governments have to step in and take part of the risk underpinning such investments, said Dr. Lars Thunell Chair, African Risk Capacity Insurance Company Limited (ARC Ltd), former Chief Executive of the International Finance Corporation (IFC), one of the few Development Finance Institutions (DFIs) that made significant money doing so. On a subsequent panel on ‘Decarbonizing Finance’, Christian Thimann, Head of Strategy, Sustainability and Public Affairs at AXA, the insurer, said one of the biggest risks for the finance sector was to be ‘out of touch’ with society’s goals, adding that sustainability was the collective responsibility of society, governments and financial institutions.
On the risk side, Thimann said AXA’s ‘liability side’ divestment of coal assets had not brought any financial penalty. But, he noted that the insurer’s related ‘asset side’ commitment to triple investment in green infrastructure had proved more difficult: “We don’t see a stream of good projects that are fit for investors, but we are sticking to the commitment.”
What was required for such infrastructure projects, he said, was clear economic viability, predictable cash flows and regulatory stability.
Catherine Howarth Chief Executive at London-based Share Action, the finance NGO, said the oft-heard investor reflection that there aren’t enough green infrastructure opportunities should act as a wake-up call to banks to engage their entrepreneurial skills to bring deals to a yield-
hungry institutional investment market: “The next generation green bonds, that’s where the transition opportunity is! UNEPFI needs to engage the banking community on this.”
Thimann, who is vice chairman of the Taskforce on Climate-Related Financial Disclosure (TCFD) backed by the Financial Stability Board of major central bankers, which is working on voluntary reporting standards for companies and investors for publication early next year, told the audience that what was needed was “forward looking information” on whether companies are in line with COP21 decarbonisation targets.
He said the Taskforce was working on four pillars to underpin this requirement: The first, he said, was the ‘governance’ of climate risk in terms of whohas firm-wide responsibilty. Second, he said, was strategy: “A carbon footprint is just a picture, we need to see the film on fast forward for climate risk in business strategy. Third, he said, was risk management: how and where it is managed with a business, and how resourced. Fourth, he said, were targets, metrics and scenarios: “has the company/investor got a decarbonisation target going forward, i.e scenario analysis?”
Thimann concluded: “If we want to mainstream climate into financial decisions there should be a section on climate risk in the company annual report so that a portfolio manager can take account of this in their usual financial evaluation. Not a bolt on, but built in!”