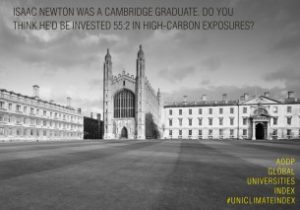 University endowment funds around the world are to be exposed to the same rankings pressure as pension funds on how they are managing the carbon emissions of their investment portfolios under a new index launched by the Asset Owners Disclosure Project (AODP).

The launch of the AODP Global Universities Index, which it says will be the dux and dunce list for the study of carbon by higher education endowments, comes as universities already face increased action from NGOs and student bodies to divest or engage with fossil fuel companies over their C02 exposure. The survey will be sent to over 300 universities in 32 countries around the world to respond. Significantly it will also allow students and alumni to pressure their institutions into responding by seeking the information directly themselves for use in the ratings analysis and submitting it via AODP’s Vital Few platform.

Julian Poulter, AODP Executive Director, said. “The Universities have become a focal point for action by stakeholders to drive better management of climate risk – we now need to see who is actually taking the action required to hedge against these very real risks. Students, alumni and others can now actually become a part of the financial system providing ratings data and disclosure to other members via the AODP Index – it’s a really exciting new financial democracy unfolding here. We have no doubt that this information will prove that many Universities are recklessly gambling their stakeholders money on the unlikely bet that climate change goes away and that the universities investments remain intact.”

AODP’s 2013-14 Global Climate Change Investment Index for asset owners showed that the majority of the world’s major retirement funds, insurance companies and sovereign wealth funds are ignoring the risks that a carbon bubble could present to their portfolios. The report was unveiled at the RI Americas conference in December 2013 in New York, organized by Responsible Investor. The report also found that the handful of asset owners who typify best practices in their integration of carbon considerations had accelerated their efforts in the past year.

The report was AODP’s second, and drew information from requests the Sydney, Australia-based nonprofit sent to the world’s 1,000 largest asset owners, including over 800 pension funds, 80 insurance companies, 50 sovereign wealth funds and 30 foundations and endowments.