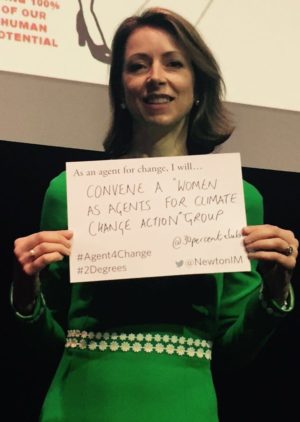 A new initiative to tackle climate change by getting more women on company boards and harnessing their significant presence in ESG teams, has been launched by Helena Morrissey, CEO of Newton Investment Management and outgoing United Nations climate chief Christiana Figueres.

Commenting on the initiative dubbed ‘Two Degrees of Change’, Figueres, Executive Secretary of the UN Framework Convention on Climate Change, said: “There is a clear parallel between the progress we’ve seen on gender equality and climate change over the last six years. Evidence suggests that a greater presence of women in the boardroom and in senior leadership roles can help increase the corporate focus on climate change.”

At a conference in London this week to launch the project, Morrissey, who is also founder of the 30% Club, a global initiative to encourage boards to have at least 30% female representation, said: “It’s an undisputed reality that traditional energy companies are led by men. Sixty percent of major energy companies have 0-10% women on boards. It is an endemic situation.”

Morrissey – who also chairs fund industry body the Investment Association – also highlighted the dominance of men in the UK fund industry, which has only 7% female representation, but by contrast around 55% of ESG teams were female, among 20 polled firms.

She led a discussion that looked at creating a “compounding effect” on driving change on climate action and gender equality. The panel included Figueres, Tony Hayward, the former BP CEO who now chairs Glencore, Rachel Kyte, the head of the UN’s Sustainable Energy for All initiative, and Nigel Wilson, Group Chief Executive of Legal and General.Hayward said no one any longer debated the positive effects of diversity, but noted that it was sometimes hard to find women with the right operational skills in the oil, gas and mining sectors. “Only 15% of females do maths and physics at A Level,” he said, referring to the UK’s school leaving qualification.

L&G’s Wilson highlighted the UK’s lagging productivity behind other OECD countries, saying a common thread was gender diversity and climate change. He continued that the UK economy was not taking advantage of the potential of its female workforce, saying investor pressure could help companies raise their game. His firm has recently voted against four companies’ boards as a result of gender diversity.

On climate change and the need for adaptation, Wilson said it was necessary to invest in real assets that created real jobs, but said quantitative easing had driven misallocation.

He called for intentional demand for new investments from Legal and General and its peers. “We need a conscious bias for investing in the ‘new’ for long term sustainable growth in our economy.”

This sentiment was echoed by Jane Ambachtsheer, partner and chair of global responsible business at Mercer, who, while giving a presentation on its work on modelling climate risk in portfolios, said one could no longer take historical trends and extrapolate forward.

Following the event this week, an action plan will be developed, focused on leveraging the increasing proportion of women on boards and significant presence of women in ESG investment teams to prioritise climate change action. It will be focused on three ‘agents for change’: women, investors and ‘millennials’.