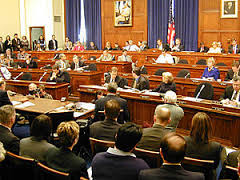 The US House of Representatives plans to hold a hearing this week looking at the “market power and impact” of proxy advisory firms, the researchers who advise institutional investors how to vote at company annual general meetings.

Witnesses called to give evidence to the hearing in Washington on June 5 include Michael McCauley, Senior Governance Officer at the $165bn (€126bn) Florida State Board of Administration (SBA).

The hearing will examine the effect proxy firms “have on corporate governance standards for public companies, the voting policies that proxy advisory firms have adopted, the market power of proxy advisory firms in an industry effectively controlled by two firms, and potential conflicts of interest” in the firms’ voting recommendations.

The hearing will be before the House Committee on Financial Services’ capital markets subcommittee, chaired by New Jersey Republican Scott Garrett.

A memorandum from the committee notes that the US proxy market is “highly concentrated” with Glass Lewis and Institutional Shareholder Services (ISS) controlling 97% of the industry.
Another issue potentially under scrutiny at the hearing could be the Ontario Teachers Pension Plan’s ownership of Glass Lewis – which the committee reckons “raises another potential conflict of interest”. The meeting will also debate the SEC’s 2010 review of the proxy system.The hearing will feature representatives from business lobby groups including the U.S. Chamber of Commerce, the Shareholder Communications Coalition and the National Investor Relations Institute.

Interestingly, no current representatives from proxy firms will be represented, according to the meeting agenda.
The only speaker connected to the industry is former SEC Chief Accountant Lynn Turner, who was research director at Glass Lewis from 2003-2007. He is testifying in his current capacity as managing director at economics and forensic consulting firm LitiNomics.
The Chamber of Commerce will be represented by former SEC Chairman Harvey Pitt. Niels Holch, Executive Director of the Shareholder Communications Coalition, which represents the Business Roundtable lobby group, will also testify. Last year the coalition wrote to the SEC raising its “substantial concerns” about conflicts of interest in the sector.
Other witness scheduled to appear include Timothy Bartl of the Center on Executive Compensation and Darla Stuckey from the Society of Corporate Secretaries & Governance Professionals.
The hearing comes at a tricky time for proxy advisors – not only is it being scheduled during their busiest time of the year but it comes in the wake of a scandal at ISS which involved an employee disclosing clients’ confidential voting data.