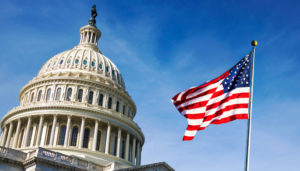 Leading US investors including the likes of CalSTRS and the New York State and City Comptrollers have written today to US financial regulators urging them to act on climate change as a systemic financial risk.

Letters have been sent to the heads of the Federal Reserve, the Office of the Comptroller of the Currency, the Federal Deposit Insurance Corporation, the Securities and Exchange Commission (SEC), the Commodity Futures Trading Commission, state insurance regulators, the Federal Insurance Office, the Federal Housing Finance Agency and the Financial Stability Oversight Council, calling on the agencies to consider how their regulatory decisions could exacerbate the climate crisis, and urging them “to implement a broader range of actions to explicitly integrate climate change across [their] mandates.”

The 72 signatories to the letter include 40 investors with nearly $1trn under management; NGOs including Ceres and the Skoll Foundation; and individuals such as Dave Jones, the former California Insurance Commissioner and one of the first regulators globally to mandate disclosure on climate risk.

“It is more clear than ever that the climate crisis poses a systemic threat to financial markets and the real economy, with significant disruptive consequences on asset valuations and our nation’s economic stability,” the letter reads. “You lead a critically important agency that has a mandate to protect US market stability and global competitiveness. This carries with it a responsibility to act on the climate crisis right now, and to guide our transition to a net-zero future.”

The signatories encourage the agencies to consider the findings and recommendations of the recently released Ceres report Addressing climate as a systemic risk: A call to action for US financial regulators, which highlights climate change as a threat to financial markets and outlines a series of more than 50 specific action steps for regulators to consider right now – all of which are deemed to fall within the agencies’ existing mandate.

The US Commodity Futures Trading Commission’s Climate-Related Market Risk Subcommittee is also set to make recommendations in the coming months.

But the SEC is generally viewed as a laggard on climate risk, with the three current SEC commissioners opposed to mandating ESG disclosure. In an unusual move, the regulator was recently petitioned by investor Impax to make companies report on physical climate risk.

The Fed has also faced political criticism for being the only central bank from the world’s five largest economies not to join the Central Bank and Supervisors Network on Greening the Financial System (NGFS).

"The message is simple: do your job. The job of financial regulators is to protect the economy from systemic risks, and climate change is a systemic risk with the potential to wreak havoc on our economy. Our financial regulators must incorporate climate across their mandate to protect the economic security of New Yorkers and of people across this country,” said New York City Comptroller Scott Stringer

The Ceres Accelerator for Sustainable Capital Markets, which coordinated the letters, is still accepting new signatories of support for this initiative.