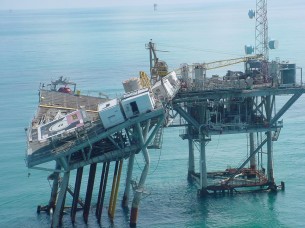 Major US oil companies are rebutting attempts by the country’s largest trades union group to force them to publish specific safety reports in the light of the 2010 BP Gulf of Mexico explosion that killed 11 oil workers and caused one of the country’s worst environmental disasters. The AFL–CIO, the largest federation of unions in the US, representing more than 11 million workers, filed shareholder resolutions at yesterday’s Marathon Oil Corporation annual general meeting (AGM) in Houston, Texas, at today’s AGM at Valero, the Fortune 500 oil company, and at the May 4th AGM of Tesoro, a Fortune 150 and Fortune Global 500 company. The resolutions ask the companies to issue a special report on steps they have taken to reduce the risk of accidents. In their shareholder proxy filings, the union requests that the report outlines the board’s oversight of process safety management, staffing levels, inspection and maintenance of refineries and other equipment. However, the boards at each of the three oil majors have recommended that shareholders vote against the resolutions. The resistance comes despite reports this week that the country’s top regulator of offshore drilling, the Bureau of Ocean Energy Management, Regulation and Enforcement, is exploring expanding its safety oversight to include thousands of contractors on offshore rigs. The oil companies say they are already addressing safety issues through existing internal procedures and reporting on them via their corporate social responsibility (CSR) reports. But the union says the safety records of each of the oil companies poses a risk to shareholder investments because of public concerns and potential legal liability.BP was forced to set aside $20bn by the US government after the Gulf of Mexico spill. In the case of Marathon Oil Corporation, the AFL–CIO said the US Occupational Safety and Health Administration (OSHA), the main federal safety agency, had issued 12 serious and 4 repeat violations related to safety to the company. At Valero, the union said that over the past five years, OSHA inspectors had revealed 59 safety violations with 49 related to process safety management, including 31 “serious,” 6 “repeat,” and 12 “other” violations at the company’s refineries. Valero said: “A separate report including operational detail as requested by the proponent would serve no useful purpose, would be burdensome, and would result in an unnecessary expense for Valero’s stockholders.” An explosion at a Tesoro refinery in Anacortes, Washington in April, 2010, killed seven workers and resulted in more than six months of downtime at an estimated cost of 120,000 barrels per day. The AFL–CIO said the Director of the Washington State Department of Labor and Industry stated that “the explosion and these deaths were preventable,” and levied an initial penalty of $2.39m. It said that since 2005, OSHA inspectors had revealed 59 safety violations at Tesoro, (48 process safety management violations, of which 33 were categorized as “wilful” and 13 categorized as “serious”). Tesoro said it believed that the report requested was unnecessary because of “our extensive safety efforts” and because its board has instructed it to expand current safety disclosures by November 30, 2011.