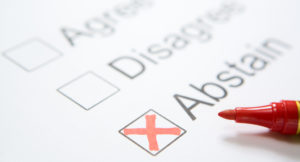 US public pension giants CalPERS and the Office of New York City Comptroller have abstained from one of the first ‘Say on Climate’ votes to be put to shareholders, at French construction giant Vinci.

CalPERS runs $444bn on behalf of public employees in California, while the New York City Comptroller oversees five public pension funds. Their abstentions come less than a week after representatives of each fund raised deep concerns about the ‘Say on Climate’ campaign, which seeks to secure annual advisory votes for shareholders on corporate decarbonisation plans.

Speaking on a webinar hosted by US proxy giant Glass Lewis last week, the pair warned that such votes could unintentionally take the heat off directors and result in the ‘rubber stamping’ of insufficient climate plans.

Despite the abstentions, yesterday’s advisory vote at Vinci passed with near unanimous approval (98.14%). BlackRock, the world’s largest asset manager, and the manager of Norway’s trillion dollar sovereign wealth fund, Norges Bank, were among its supporters.

BlackRock said it supported the plan as it “provides a clear roadmap towards the company’s stated climate ambitions and targets”.

Vinci is one of a growing number of firms to voluntarily offer a vote on their transition plans in response to the campaign, launched by UK hedge fund manager Sir Chris Hohn and his firm The Children’s Investment Fund (TCI) last November.

But ‘Say on Climate’ has divided those in the responsible investment world, with some viewing it as a pathway to holding boards accountable and others seeing as repeating the mistakes of the ‘Say on Pay’ campaign a decade ago, which failed to achieve change on executive compensation packages.

“It didn’t work with pay, so why would it work on climate?” asked Anne Simpson, Managing Director for Board Governance & Sustainability at CalPERS, during the webinar. She added: “If you start peeling off particular issues which shareholders vote on separately, then why aren’t we simply sitting on the board?”, adding that shareholders should instead “delegate to the board and then hold the board accountable”.

She claimed CalPERS has done this on pay packages – shifting its focus from voting on ‘Say on Pay’ to holding compensation committee members accountable.

“To us, it [Say on Climate] looks more like a delay on what needs to happen rather than something that will get us there quicker”, Simpson concluded.

New York City’s Assistant Comptroller and head of Corporate Governance and Responsible Investment, Micheal Garland, agreed with Simpsons. Speaking on the same webinar, he described ‘Say on Pay’ as an “utter and complete failure”, which has unintendedly served as a “safety valve against holding individual directors accountable”.

Just like on pay, Garland said, climate votes will pass with over 90% support, serving simply to “rubber stamp the status quo”.

He also questioned whether New York City had the “capacity to analyse climate transition plans”.

“You know a failure if you see it, so that’s when we’d say ‘let’s hold a director accountable’, [but] I don’t think we want to own a vote for a plan and say ‘this plan is good’ and give it our seal of approval”.

Garland also expressed concerns that supporting a corporate climate plan “might jeopardise our right to take legal action in the future, if those disclosures were ever revealed to be fraudulent in some way and we had somehow given them our seal of approval”.

It was also revealed on the webinar that the New York State Common Retirement Fund will abstain from all ‘Say on Climate’ votes and proposals this year. The $226bn fund’s Executive Director of Corporate Governance, Liz Gordon, said that its proxy voting guidelines had not been updated yet to “speak specifically to these types of ballot items”. But she also said that she shared the concerns raised by Simpson and Garland.