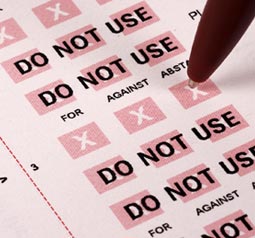 Shareholder proposals filed by union-sponsored and public pension plans at US corporate AGMs show no clear evidence of short- or long-term improvements in operating or stock market performance of the target firms and may be placing trustees in breach of their fiduciary duty under ERISA guidelines, according to a study commissioned by the US Chamber of Commerce. Navigant Consulting, which carried out the study, said it had examined “key vote” shareholder proposals put forward between 2002-2008 by the AFL–CIO, the US’ largest union federation, which were supported by union-sponsored and public pension funds, employee shareholders and other investors. Over seven years, Navigant said it had relevant data on 170 shareholder proposals. The consultant said its research found no statistically significant overall short- run or long-run improvement and said there was actually some indication of a long-run decrease in market value for target firms in the sample. Conversely, it said there was anecdotal evidence that both target firms and the sponsors of shareholder proposals incurred costs as a result of the proxy proposal process. It said: “Overall, we find noconclusive evidence that shareholder proposals tangibly improve firm value. Given the costs associated with the proxy process and the unproven impact on company value, some consideration should be given to the net benefits of such initiatives. The report noted that a recent U.S. Department of Labor update to the ERISA guidelines for institutional investors defined fiduciary duty as meaning the consideration of purely economic issues in pension fund strategy, not public policy preferences. It said: “Pension plan managers risk violating their fiduciary duty by incurring the costs associated with shareholder activism, unless they can demonstrate that the benefits associated with such activism (i.e. increased shareholder value) can be reasonably expected to outweigh the costs. The Department’s guidance also encourages fiduciaries to keep records of cost -benefit analyses performed to ensure that they have met the standards of ERISA.” Navigant said a 2003 report based on data gathered by the SEC had estimated that the cost per company of including a proposal on the proxy was approximately $50,000 and that total annual expenditures on shareholder proposals could be in the region of $91m.
Link to US Chamber of Commerce report