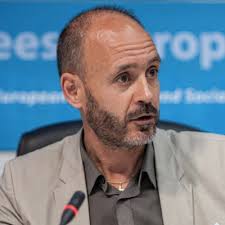 Giuseppe van der Helm is to step down as executive director of the Dutch Association of Investors for Sustainable Development (VBDO) after nine years in the post, and will also leave his chairmanship of the European sustainable investment industry lobby group Eurosif.

Van der Helm will leave the VBDO on December 1. Chairman Jan Pieter Six said: “In his nine years with us Giuseppe van der Helm has been the front man of VBDO.

“Great progress has been made under his leadership in the growth of sustainability by the capital market and thus also in society. The management and the team are very thankful for his untiring involvement.”

Van der Helm said: “The VBDO was established 20 years ago. During this second decade I’ve seen our organization grow by a factor of four, whereby the impact on the financial sector and the stock market listed companies has increased considerably and demonstrably. This was not possible without the unrelenting determination of our team and our members and I am very proud to have worked with them.”

During the coming months the VBDO will be looking for a new director. Ton Bervoets, an ex-board member of the association, will support the VBDO team until a new director is found.

The VBDO published its latest edition of the Benchmark on Responsible Investment by Pension Funds in the Netherlands late last month, in which it called for greater collaboration between funds.

Speaking to RI about his exit from Eurosif, van der Helm said that his second term as chair was coming to an endand that the organisation was going through a governance restructuring. “At the next board meeting I will step down as chairman of Eurosif,” he said.

Following the departure of Eurosif’s executive director Francois Passant in July, the organisation is to be governed directly by the European SIFs (Sustainable Investment Forums) that back it.

To this end, the SIFs – including UKSIF, FNG (Germany), Spainsif, FIR (France), VBDO (the Netherlands), Swesif (Sweden) and the Italian Forum for Sustainable Finance – have created a new Board and Executive Committee for the lobby.

Van der Helm said rather than have a chair who is connected to a SIF, the organisation is seeking an independent chair. “It should be a senior person from the investment community with an eye for stakeholders and the political process. A seasoned professional,” he said. “There is a shortlist of names that Eurosif will be contacting next month. Hopefully there will be someone in place in January.”

Van der Helm said he would take some time off before planning his next step. “You have to cut down wood to make room for new things,” he said, adding that he would be attracted to an international role, possibly involving the UN Sustainable Development Goals.

Van der Helm, a former President Europe of motor oil firm Valvoline, is also chairman of Tax Justice, a position he has held since 2014.