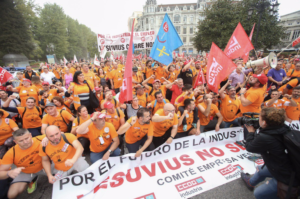 The decision to shut down two profitable factories in northern Spain by Vesuvius, a London-based ceramic engineering firm that is in the FTSE 250 index, has escalated into a labour conflict featuring street protests and European trade unions mulling legal action if talks with management fail.

The next target of the protests, unions say, are investors – many of whom are self-declared responsible investors and PRI signatories – who could find themselves at the crux of an international labour dispute that, while it hasn’t generated international headlines yet, has turned sour locally.

One of the affected workers, aged 39, died of a heart attack this week after participating in the demonstrations.

And, with the new focus on stakeholders, and not just shareholders, heralded by the US Business Roundtable, the episode puts a spotlight on the ‘S’ – social factors – of ESG.

Vesuvius this month announced plans to close its factories in Asturias and Miranda de Ebro, which employ about 130 employees and have been profitable for the last four years, and reallocate production to Poland, the Czech Republic and Turkey.

The company has long-established roots in the Asturian factory of Langreo, where 111 Vesuvius workers are facing layoffs – with knock-on effects through the region.

Among Vesuvius’s shareholders is Cevian Capital, the Stockholm-based activist hedge fund with $15bn in assets under management.

Cevian’s 21% stake has granted founder Christer Gardell a seat at the board of Vesuvius as a non-executive director.

Gardell is considered the European counterpart of US activist investors such as Dan Loeb, Paul Singer or Carl Icahn, the latter an investor in Cevian Capital.

Lord Myners, the institutional investment chief turned City Minister, is chairman and a partner of the firm’s UK arm.

The labour dispute has escalated from protests in the streets of Asturias to the offices of governments, trade unions and European parliamentarians — and soon to the board of Vesuvius and its shareholders, according to Luis Colunga, Deputy General Secretary of the European trade union federation IndustriAll.

Colunga told RI that Vesuvius has skipped the reasonable period of information and consultation or “stakeholder dialogue” due in such a crucial decision, arguing that the dispute is not transnational as it only affects Spain.

IndustriAll is seeking to open a mediation process in the UK to suspend the planned layoffs, whose deadline is October 14, which would allow for such dialogue and potential negotiations with Vesuvius to happen. If the mediation doesn’t materialise other legal avenues will be sought.

In the meantime, IndustriAll will be approaching Spanish, British and Swedish MEPs, as well as Sweden’s Prime Minister, Stefan Löfven, who is a former trade unionist.

The regional government of Asturias has called Vesuvius’ decision a “nonsense” and “contradictory” since the factories are profitable and warned about “the social impact” of ceasing the activity.

According to the regional government, Vesuvius recognises the profitability and capacity of the workforce in Spain (one worker has been recently recognised with a special award of the multinational). It adduces factors of the global steel industry, which Vesuvius business serves, to justify the decision.

Both the regional and Spanish governments disagree with the decision and support reversing Vesuvius’ decision.