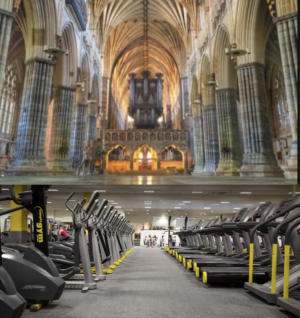 In the latest of their online debates, RI’s Carlos Tornero and Daniel Brooksbank argue about the nature of the Principles for Responsible Investment (PRI).

Carlos argues that the PRI is like a gym membership while for Daniel it’s more like a church. Check out their earlier battle over Stewardship Codes.

As before, it is up to you, dear RI reader, to judge for yourself with an anonymous vote: see the bottom of the page. To be clear: this a non-binding referendum…

The vote is completely anonymous and voter details will not be disclosed.

In ancient Greece, a gymnasium was not just a place where athletes would train (naked) for the Olympic Games and other contests to honour the gods. Gyms were also educational institutions; in some countries, secondary schools are to this day known as gymnasiums.
In any case, sticking to our more narcissistic understanding of contemporary gyms, let’s not disregard the benefits of a healthy mind in a healthy body.
Why does the PRI resemble a gym more than anything else? First, it has to do with the high expectations people have about an organisation that radiates the United Nations halo.
True, the PRI was launched under the auspices of the late United Nations Secretary-General Kofi Annan, but it is not an agency or body of the UN.
The PRI is nothing more, nor less, than a group of like-minded colleagues coming together to set up a private membership organisation where they can train themselves while being “leading proponents” of responsible investment fitness.
Not long ago a majority of investors would regard joining an ESG gym as a distraction from their real fiduciary duties of maximising returns at any cost.
The Paris Agreement, and the climate emergency it tries to solve, have changed if not reversed that view, reigniting responsible investment and making ESG almost the new normal.
Now the majority of investors can’t afford to be seen sitting on their hands or worse: carrying on business as usual and turning a blind eye to their investees’ corporate misbehaviour. What to do then?
Signing up to the PRI gym is a good beginning but it wouldn’t necessarily turn a fat cat into an Adonis. I suppose the PRI gives signatories the means and tools to pump their ESG muscles. But, and this is the crucial part, the PRI can’t do it for them.
However, membership can also provide cover for the ESG-washing that has the potential to undermine the sector.
With almost 2,500 signatories representing $85trn, one would assume that the financing to solve the world’s most urgent problems is already guaranteed by the signatory investors who manage people’s savings.
Similarly, with almost 10m members in the UK’s 7,000 gyms, one would assume that obesity is not an issue. Yet the reality is entirely different, of course.No, it’s more like a Church:

As the PRI congregates in Paris today, responsible investment is at the stage Christianity was at when it became the official religion of the Roman Empire in the 4th century. The Emperor had a vision, was converted and the days of Christians being fed to the lions were over. It had gone “mainstream”.

Like early Christianity, the PRI has its own credo. The former has the Nicene Creed while the PRI has its principles – though this stops short of being anything like a strict doctrine. There is no “orthodoxy” because the PRI has always been a “broad church”.

This means it can incorporate a sometimes bewildering array of views, where signatories can range from ESG “true believers” convinced in the transformative power of capital, to “false prophets” – the free-riders looking to the marketing upside of membership.

But, the PRI does have a form of excommunication (de-listing) and Inquisition (the reporting and assessment framework!).

What is the PRI’s own stated mission? “We believe that an economically efficient, sustainable global financial system is a necessity for long-term value creation. Such a system will reward long-term, responsible investment and benefit the environment and society as a whole.”

What about the six principles themselves?

They are “voluntary and aspirational” and offer a “menu of possible actions”. Three of the principles refer to the principles themselves, a piece of self-reference that borders on the solipsistic. Angels dancing on a pin, anyone?

I don’t deny that Carlos’s gym analogy is a good one though surely a golf club is a better sporting metaphor, given the PRI’s supreme networking value.

On its website, under ‘what is the PRI?’ it says: “The PRI is the world’s leading proponent of responsible investment.”

But any church has its heretics. There are some in the civil society world who will say the PRI and bodies like it are ‘part of the problem’, that it has become too unwieldy, too centralised and hamstrung by having to pander to the lowest common denominator.

As the PRI has grown, the ‘evangelism’ of the early days has morphed into the professionalism of an industry body. That is to be welcomed, and we welcome it unreservedly. But has the passion of the early martyrs been replaced by a self-perpetuating bureaucracy?

It’s helpful for religions to have a holy text, a founding document. For the PRI that would be the Freshfields report on fiduciary duty back in 2005.
I could go on, but some analogies can only be stretched so far. Good luck to all at PRI in Person this week!