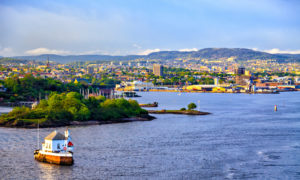 Norges Bank Investment Management’s (NBIM) engagements are generating value among portfolio companies, according to its Head of ESG Risk Monitoring.

Speaking to RI, Christopher Wright said that larger companies who are exposed to institutional investors “may have stronger incentives to transition”.

“All of them won’t succeed, but we want to help them succeed, and we think this will drive value for the companies and also for us,” he continued.

Wright was keen to emphasise that engagement remained the key tool for NBIM, the manager of the Norwegian $1trn sovereign wealth fund, after it recently released figures show that the fund’s divestments have generated 41bp in relative returns cumulatively since 2012.

“We publish the relative return figure on the divestments, but it's hard to put a number on the value of engagements,” he said. “But we do believe they generate value, even if you cannot easily present an exact figure for this. Our engagements are carried out in close collaboration with our portfolio managers and directed at issues we believe to be central to long-term value creation.”

Because the fund has to remain within 125bp of its benchmark, “in practice that means we have to remain an owner and investor in most companies”, he said, meaning that engagement is “really the only option” for many of NBIM’s larger holdings. Divestments are therefore mostly focused on selected smaller companies in the portfolio, where engagement is unlikely to succeed, or little benefit is seen in starting a lengthy engagement, Wright explained.

“Because the divestments focus on the smaller positions in the portfolio, many decisions will follow from a risk assessment and the relative portfolio implications, with no direct analysis of the merits of engagement as an alternative,” Wright said.

NBIM has two divestment processes. The Council of Ethics, which sits independently from the manager, can make recommendations to exclude companies based on ethical guidelines, a process which does not take into account the size of the fund’s position in a company or any risk return perspectives. The Council is supported in this work by data provider RepRisk, which announced on Tuesday that it had secured a fourth consecutive ESG risk data contract with the Council, meaning it will continue to provide its services until December 2025. If the bank’s executive board decides to exclude the company on the basis of the Council’s recommendation, it is also excluded from the benchmark.

The firms divested by the fund are broadly diversified across sector and geography, so it’s difficult to point to a key factor in their relative underperformance, Patrick du Plessis, NBIM’s Global Head of Risk Monitoring said. Underperformance can come from both company-specific risk and market or sector-wide risk, with NBIM performing especially well in identifying company-specific risk, which “has provided some positive payoff in terms of relative return”, he continued.

NBIM also recently introduced ESG pre-screening of companies likely to be added to the FTSE Global All Cap index on which the fund’s strategic equity benchmark is based. This risk screening was previously delegated on an ad hoc basis to portfolio managers, but has now been centralised within the risk department. Companies confirmed to be joining the index as well as those deemed likely to be included in the quarterly rebalancings are systematically screened for ESG risks using an internal risk model and external ESG ratings.

However there is a relative lack of ESG data for many of these companies, Wright explains. This could be because they are recent IPOs, not covered by major ratings agencies or small cap companies.

“That means that the decisions we make are associated with more uncertainty, they’re literally risk-based investments”, he said.

“When we take companies out, we look at the information we have from external sources, and use an in-house model to identify the risk profile of the company given its country and sector.”

A decision is then made in consultation with portfolio managers whether to exclude a company or flag it for further engagement. Of the 442 companies assessed since this work began, nine have been excluded and a further 65 have been flagged as having a high sustainability risk.

Meanwhile, Norway’s sovereign wealth fund is under increasing pressure to commit to Net Zero – it is a notable absentee from investor coalitions such as the Net Zero Asset Owner Alliance. Norway’s new prime minister Jonas Gahr Støre told an event at COP26 that it the government is planning to commit the fund to Net Zero by 2050. In a report in October last year, the government said the fund must have “a long-term goal of zero emissions from the companies in which [it] has invested”. It will be given the freedom to invest more in renewables infrastructure and “other climate technology” under the plans.

And in late December, NBIM’s Deputy Governor Øystein Børsum said it supported a recommendation made by an expert appointed by the Ministry of Finance in August last year that the fund is given a goal of working towards Net Zero emissions from companies it is invested in. He emphasised that the fund did not intend to divest from companies with high emissions, but aimed to use its investments to be "a driver for change, pushing companies to make the transition to net zero emissions".

Du Plessis emphasised the importance of this, saying the fund should build off a focus of supporting portfolio companies getting to Net Zero.

“While our intention absolutely is to focus on Net Zero for portfolio companies, what we don’t think makes sense is to deviate from our strategy of retaining a broad-based market exposure,” he added.