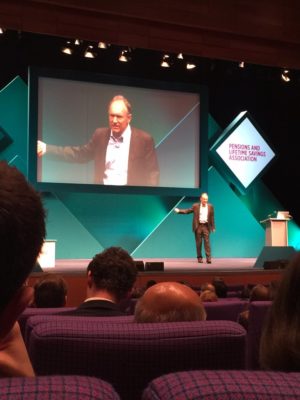 Sir Tim Berners-Lee, the founder of the World Wide Web, has told investors that he sees no value in high freqency trading.

Speaking at the Pensions and Lifetime Savings Association (PLSA) annual investment conference in Edinburgh, Berners-Lee said: “I dont see its value to humanity, it’s the opposite of long term investing.”

Berners-Lee, who is the director of the World Wide Web Consortium (W3C), which oversees the Web’s continued development, is a member of the board of trustees of the Ford Foundation.

He explained that as a physicist (he developed the web while at the CERN particle physics lab) his intuition was to have some sort of clock so there’s a minutes pause to enable equality of trading and removing the need for trading houses to locate next to exchanges.
This scepticism about high frequency trading was echoed, in a separate panel session, by Chris Hitchen, the CEO of railways pension fund Railpen.Hitchen, a former chair of the PLSA’s forerunner the National Association of Pension Funds and a member of 2012’s Kay Review panel, said: “For my members it doesn’t matter if the price of securities is right this second – we’re looking for long-term fairness not the short term fairness of HFTs.
“They’re charging for price discovery when we don’t need price discovery.”

Hitchens noted how the industry was “still trying” to grapple with some of the investment chain issues highlighted by the Kay report. “Most trustees,” he said, “are looking for their asset managers to be their ‘guardians’ in the market.”
He also observed that his own fund was still, despite a recent overhaul, too diversified to be able to fuly engage with companies. And he described how Railpen had taken a leaf out of British cycling chief Sir Dave Brailsford’s “marginal gains” philosophy to try to make a series of small but significant improvements. This means it looks “forensically” at costs and even employs somebody full time to drill down on costs.