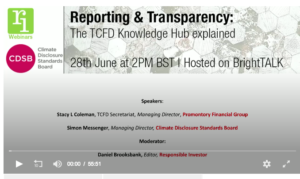 The secretariat of the Taskforce for Climate-related Financial Disclosures (TCFD) says it would welcome ideas from the sector amid uncertainty about its future.

Asked about the outlook for the taskforce on a joint Responsible Investor/Climate Disclosure Standards Board webinar, secretariat member Stacy Coleman said: “Great question, with not such an insightful answer.”

Coleman, a former top official at the US Federal Reserve, is Managing Director at Promontory Financial, the high-powered Washington DC consulting firm that has acted as the TCFD’s secretariat.

Instrumental in the TCFD’s final report, she works at Promontory with former SEC Chair Mary Schapiro, who is an advisor to TCFD Chair Michael Bloomberg.

Coleman continued: “In terms of ‘will it continue?’ I think it will continue in some fashion, whether that’s with the FSB [Financial Stability Board] support behind it, it’s unclear at this time.”

The TCFD has been supported by the FSB under the chairmanship of Bank of England Governor Mark Carney.

The FSB met in Basel this week and its official communiqué briefly stated that it received an update on the TCFD and that the taskforce will publish its monitoring report in September. An FSB spokesman did not respond to a request for comment.

Coleman – speaking a year to the day since the TCFD’s final report was published- continued: “We should know something before we are set to disband in September and the taskforce itself will begin discussions itself about the future of the taskforce.We have a meeting in July and so we too are starting to think about ‘how do we keep the momentum going and what else can we do to contribute to implementation efforts?’.

“So if you have ideas we’re definitely happy to hear them,” she said, saying people could either contact the TCFD via its website or “even this venue” [i.e. the webinar]. “But there’s more to come,” she added.

“If you have ideas we’re happy to hear them”

In April, Carney – who has just under a year remaining at the BOE — said the work of the taskforce would continue beyond the Argentine G20 Summit in late 2018 and into the Japanese G20 presidency in 2019. A spokesman for the FSB said the Chair’s statement was still relevant.

A key initiative that has occurred since Carney flagged up climate risk in his famous ‘Tragedy of the Horizon’ speech in 2015, has been the launch of the central bank-level Network for the Greening of the Financial System.

Another topic on the webinar was the extent to which the TCFD is being used by investors and Coleman said: “We don’t have a great sense of it at this point. We’ve been in discussions with some investors and they’re struggling in some way to figure out how to incorporate this information into their decision-making.” Fellow panelist Simon Messenger of the CDSB pointed out that it’s only been 12 months so it’s a learning process.