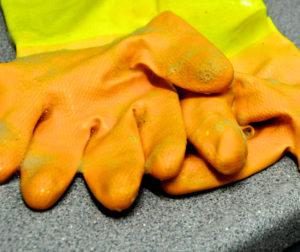 Foreign investors own at least $217.9m worth of shares at Malaysia’s Top Glove – the firm embroiled in scandal after allegations of forced labour and other human rights violations.

Asset managers registered in the US and Europe, including Vanguard, BlackRock, Goldman Sachs and Fidelity, make up 17 of the manufacturer’s top 20 shareholders and collectively hold more than 6% of outstanding shares.

Some asset managers – such as Robeco – have significantly reduced their positions after the scandal hit headlines; although BlackRock, Vanguard and Goldman Sachs have continued to add to theirs, according to data from Morningstar. It is unclear whether this is the result of active management decisions or automatic allocations reflecting movements in an underlying index

In interviews with the Guardian, migrant workers – primarily from Nepal and Bangladesh – described their employment as “mental torture”, with workers expected to work seven days a week, at least 12 hours a day, with only one day off a month.
Many described paying astronomical recruitment fees – £3,300-£3,700 for Bangladeshi workers and up to £1,300 for Nepalese workers –  to get a job at Top Glove, leaving them in debt bondage.

Other allegations include the involuntary retention of passports and unsafe factory working conditions, which have resulted in workers losing limbs. Top Glove denies all allegations, and Malaysia’s Human Resources Ministry declared that there has been no coercion of foreign workers to work overtime at the glove-maker.

At $3.5bn, Top Glove is the world’s biggest manufacturer of rubber gloves and a major employer in Malaysia, with more than 40 factories. The group also has operations in Thailand, China, the US, Germany and Brazil. It is a constituent of the MSCI Emerging Markets, with a current weighting of 0.037%, and is included on the FTSE4Good Bursa Malaysia Index, which lists ESG leaders among the biggest 200 Malaysian stocks.

Although share prices plunged in response to the Guardian expose, they have steadily risen over the past week, prompted in part by Top Glove’s official denial of the claims last Tuesday. There has been significant stock acquisition by Malaysia’s Employees Provident Fund (EPF) – a state-owned pension fund – as well as a number of new investors such as Royal London Asset Management, Degroof Petercam and BlackRock (Australia).

Commenting on the story, Rev David Schilling, Senior Program Director at the Interfaith Center on Corporate Responsibility (ICCR) said: “ICCR members have pressed companies to adopt and implement a policy of no worker-paid recruitment fees, no personal papers/passport confiscation and written contracts spelling out the terms and conditions of employment at the first point of recruitment.

“Clearly companies like Top Glove have a long ways to go to address these human rights issues impacting thousands of migrant workers, and investors need to raise serious questions of the companies they hold.”