Responsible Investor
Home News & Analysis Institutions What will the next five years bring in the evolution of corporate...
Return to search
Institutions 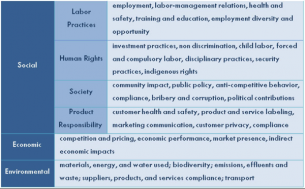 The New Metrics of Sustainable Business Conference wrapped up its two days at the Wharton School in Philadelphia last Friday with a poll: What do you predict the next five years will bring in the evolution of corporate sustainability standards? The conductor of the informal vote was Bahar Gidwani, co-founder and CEO of CSRHub and the moderator of the conference’s final panel, “The Evolution of Sustainability Standards.” Gidwani had already established that with roughly 300 certification programs wrestling for the privilege to standardize the language around corporate sustainability reporting and ratings, the space is too crowded for its own good. To gauge how many of the corporate sustainability executives, sustainable investors, and others left sitting in the thinned-out Friday afternoon audience honestly believed that the chaos was bound to dissipate anytime soon, he asked for a simple show of hands. Which of three medium-term outcomes, he asked, seems most likely? 1) More of the same—the space will continue to suffer from too many competing standards and not enough standardization; 2) a vast improvement over the current arena—corporate sustainability proponents will see a smooth transition to a sensible and perfectly usable set of standards; or 3) failure—“the accountants will take over,” presumably dispensing with any references to sustainability with glee. The overwhelming majority of hands raised for option one, gloomily acknowledging that the messy status quo is probably what corporate sustainability champions will be stuck with, for a while.
In many ways, it was a surprising note to end on after two days of panels, presentations, and discussions centering on the “New Metrics” meant to helpcompanies and investors move beyond strict financial indicators and account for businesses’ broader environmental and societal impacts. But, ultimately, the conclusion seemed to aptly reflect what the event had revealed: a corporate sustainability space offering lots of stabs at these “new metrics”—and a striking lack of cohesion among them. The New Metrics conference, organized by Burlingame, California-based Sustainable Life Media, was attended by 160 people, most of them corporate sustainability managers from companies including Monsanto, Unilever, DuPont, AT&T, Coca Cola, Walmart, who convened to hear panel discussions on topics like “New Horizons in Measuring the ROI of Sustainability” and “Enabling CFOs to See Sustainability as Central to Core Strategy.” Many of the presenters were corporate sustainability heads themselves, invited to explain how their companies are measuring their progress toward more enlightened operations (and reputations). Their strategies were far-flung and—as is to be expected in these early days—often discordant with one another. A handful of companies, like California-based Jackson Family Wines, explained how they’d managed to significantly cut down on water and energy use and presented the strong business case for doing so. Becker Underwood, the Ames, Iowa-based producer of biological products for the agricultural sector, presented a slightly different approach to gauging their sustainability—an approach they’ve trademarked as NET PositiveTM. The company’s NET PositiveTM policy acknowledges that the producer of seed coatings and biofungicides has negative impacts on the environment and society, explained Daniel Krohn, global sustainability lead. The goal should simply be to outweigh those harsh impacts with positive ones.

But in a panel the next morning called “Standardizing Sustainability Context,” Mark McElroy, founder and executive director of the Center for Sustainable Organizations, cautioned against sustainability metrics that allow companies to celebrate relative, incremental improvements in their resource consumption without considering the much larger context in which they’re operating. Simply reporting on a company’s yearly water consumption, for example, or expressing that absolute metric relative to some other variable of interest (like unit of production or dollar of revenue) doesn’t force companies to consider the resource limits they’re faced with. He recommends a new tactic pioneered within Vermont ice cream company Ben & Jerry’s: incorporating context-based limits. In this approach, companies create carbon reduction goals pinned to safe atmospheric levels—not solely based on where their carbon output started.
McElroy noted that the host of sustainable reporting standards being revised and created fail to take such a context into account. Indeed, Bill Baue, a member of the same panel and an advisor to the Sustainability Accounting Standards Board—a nonprofit seeking to establish industry-specific sustainability accounting standards for disclosure in tax filings and the like—acknowledges that the SASB board doesn’t consider it the responsibility of the sustainability standard writer to establish the context thresholds that companies should hold themselves to. Setting that type of normative layer, the SASB team argues, should be the job of a third-party, like a government regulator. But for his part, Baue says he disagrees with SASB’s position on the question of context. He believes that a body like SASB could encourage or require companies to consider the resource limits they’re working within, even if those limits are set by a regulatory body. In this vein, Baue founded the Sustainability Context Group to advocate for better language around context from sustainability standard setters like SASB, the Global Reporting Initiative, and others. But the disagreements run even deeper than questions of how to put sustainability goals into a larger context, or which sustainability reporting standard is best, or what the best way to cut down on resources might be. Though it was left largelyunaddressed in the New Metrics panels and discussion, a fundamental discord around the question of why companies should be looking for ways to measure their impact and improve their sustainability emerged during the proceedings—if quietly. Should executives and investors care about sustainability solely because it serves their profit margin? Should they be concerned with workers in their supply chains and the speed of deforestation, not in spite of the fact that they’re cold, hard capitalists, but because of it? Gregory Larkin, who works in innovation and new product development at Bloomberg, was straightforward about his affirmation of this school of thought. He stressed that in his role at Bloomberg, his aim is to find megatrends in the market that can drive alpha, and that he considers sustainability factors “when appropriate.” “It’s a tool to beat the market, not to do good or feel good,” he said. It can be dangerous, he added, to confuse sustainability’s fuzzy side with the capitalistic impulses that are driving business and investor interest in the area. “If the two are not aligned,” he said, “it’s going to be bad for everyone.” His words were received with an emphatic spurt of applause.
But later in the day, Steve Lydenberg, a partner of strategic vision at Domini Social Investments—and the co-founding “L” in pioneering sustainable investing
firm KLD Research and Analytics—made a case for moving past the conception of ourselves as purely rational, self-interested economic actors. He drew a distinction between rational and reasonable behavior, adopting the legal definition for the latter and intending it to mean action motivated by a concern for others. On the other hand, “rational” behavior, in the language of economists, focuses wholly on self-interest. “People are not rational actors in the market,” Lydenberg said. “They’re reasonable.” They consider their impact on society, he insists—and not just when profit will follow close behind. Even among the sustainability crowd gathered at the New Metrics conference, a deep chasm still exists dividing answers to the question, “Are we rational or reasonable?” It’s unlikely that a complete consensus will ever emerge on that point, but it does seem evident that before a common set of sustainability metrics can emerge, their users should, at the very least, agree about what they’re for.