Justin Onuekwusi, Head of Retail Multi-Asset Funds at Legal & General Investment Management (LGIM) and Co-chair of its Inclusion Team, describes the Black Lives Matter movement as a “big moment” for the investment industry, as well as the world at large. “I think what the incidents of the last few weeks have done is really shine a light on the ethnicity, but also, particularly the challenges of black people. And often, it takes these horrible, horrible moments in time to create that catalyst for change.”

So how can investors make sure the change is meaningful?

Companies have been pumping out press releases and statements in solidarity; but, while it is important to have this dialogue and awareness, a recent survey from the US National Association for the Advancement of Colored People (NAACP) highlights some discrepancies between words and actions. Its Legislative Report Card, an exploration of key civil rights votes since 1914, reveals that, although Citigroup promotes racial justice across social media, for example, and its CFO Mark Mason has promised to donate to the NAACP Legal Defense Fund and other civil rights organisations, during the 2020 election cycle, the bank donated $242,000 to 74 members of US Congress with an "F" rating from NAACP – meaning they voted with the NAACP in less than 60% of instances. Most of the members Citigroup supported scored far lower, many in the single digits. And Citigroup is not alone – giants like Google and Amazon also featured on the NAACP list.

Onuekwusi acknowledges concerns about “lots of words and not enough action”, but observes that the current debate feels different. “We are seeing action,” he says, adding that many corporations are putting in “long-term structural initiatives to create a better, more inclusive environment within their businesses”.

Earlier this month, 130 institutional investors signed a letter committing to address systemic racism through their portfolios, corporate engagement, and policy advocacy. The Racial Justice Investing coalition, which includes Calvert Impact Capital, Boston Common Asset Management and KGAL Group, said in a joint statement: “We recognise that the investor community has contributed to and benefited from racist systems and the entrenchment of white supremacy… We acknowledge the deep roots of structural racial inequity… We denounce the racist tactics and brutality deployed by law enforcement… We denounce the militarization of police and the anti-democratic response to protests.”

While much of the money institutional investors are dedicating to addressing racial injustice has so far been philanthropic – the $10m Goldman Sachs Fund for Racial Equity and the BlackRock Foundation’s $5m commitment, for example – financial products are launching too. Japan's SoftBank has established a $100m fund to invest in companies led by people of colour, and last year, impact specialist OpenInvest introduced a “racial justice” indexing tool to enable investors to better assess issues like racial diversity in workforces at companies.

Spurred on by high-profile campaigns on gender equality over the past two years, banks began to issue “gender bonds” – debt dedicated to financing companies with high levels of women in senior positions, or projects that supported female empowerment, for example – but there is yet to be the same response to the current calls for racial equality. When asked if it was planning to expand its use-of-proceeds bonds to address racial inequality, the World Bank – one of the biggest issuers of gender bonds – told RI: “While we currently have no plans to issue a specific bond with this theme, our bond issuance programme has been developed to raise awareness of key issues and support the Sustainable Development Goals.”

Onuekwusi notes that diversity efforts in the financial world have tended to focus on gender rather than ethnicity and race. “The amount of black people at senior level is pretty horrendous,” he says. “Clearly there’s a big problem when it comes to senior representation.”

A Stanford Graduate School of Business report on C-suite diversity at Fortune 100 companies found black professionals made up just 3% of the CEOs, 1% of the CFOs and 3% of the division leaders in 2020. In the UK, as cruise company Carnival drops out of the FTSE100 on the back of the coronavirus crisis, the benchmark will reportedly lose its only black CEO, Arnold Donald.

Until now, Onuekwusi believes diversity and inclusion have been treated as an HR issue, rather than a financially-material challenge for businesses. McKinsey found that in the case of ethnic and cultural diversity, top-quartile companies outperformed those in the fourth one by 36% in profitability. However, Alex Edelman, finance professor at the London Business School and Academic Director of the Centre for Corporate Governance, highlighted flaws in that study, saying its definition of performance was too narrow to be robust. “We need to be a little careful with the idea of the ‘business case’ for diversity,” he said on a panel at RI’s recent Digital Summer Festival (Digifest). The idea of increasing diversity because it’ll make a company more money is “problematic” he added: “I think this is something that one should do because it’s the right thing to do.”

Blackrock, the world's biggest asset manager, has made a number of in-house commitments on racial diversity, setting a US target of doubling its representation of black senior leaders and increasing overall representation by 30% by 2024. Currently, only 3% of senior leaders (directors and above) and 5% of Blackrock’s workforce in the US is black. It has also signed the “Race at Work Charter”, which commits it to measuring, disclosing on, and advancing ethnic and racial diversity and equality in its UK workforce.

But CEO Larry Fink committed to taking these efforts beyond its own workforce and into its investee companies, stating last month that “diversifying the companies we partner with to serve our clients helps us to deliver better outcomes”.

Jane Ambachtsheer, Global Head of Sustainability at BNP Paribas Asset Management, spoke on a panel at RI Digifest, urging fellow investors to “think about… resolutions for next year [addressing] structural injustice and racism that we can tackle from an investment perspective”.

“We’re talking about that internally, and I think we need to talk about it as a community,” she continued, adding that the focus should be on "everything from getting the right data so we can measure how companies are doing and pushing on that kind of disclosure, pushing on board transparency, making statements, pushing on public policy developments”.

This week, New York City Comptroller, Scott Stringer, began pushing big corporates like Amazon to disclose workforce information on gender, race and ethnicity, on behalf of three of the city’s pension funds. John Streur, CEO of Calvert Research and Management, also committed recently to push investee companies to disclose the racial composition of their boards and management, and details on pay equality, describing it as “long overdue”.

As well as pushing harder on pay equity and representation at senior levels of companies, investors will also need to address investments made in industries that exacerbate racial inequality. Writing in MarketWatch this week, CEO of data provider FreeCap Financial,  Tanay Tatum-Edwards, warned: “Investors cannot have a conversation about racial equity without talking about mass incarceration and the US prison industrial complex”.

In 2018, RI wrote an article outlining the growing number of investors – particularly public pension funds, foundations and endowments – pulling out of US prison stocks on ethical and reputational grounds.

But it isn't just direct investment into prisons that is coming under scrutiny. The same year, NorthStar Asset Management published Prison Labor in the United States: An Investor Perspective with CEO Julie Goodridge stating: “Our country’s capitalist economy is firmly based upon the exploitation of slaves and their descendants, and our criminal justice system has always been racially-skewed towards incarcerating people of colour. Today’s prison labour is an extension of this abuse,” referring to unpaid work undertaken by inmates which ends up in the supply chains of large companies.

Costco Wholesale, TJX and Home Depot were among those called out for being potentially exposed to prison labour in their supply chains, and last year, NorthStar filed shareholder resolutions on the topic at all of them.

The banking industry is also coming under fire, especially in the US, with reports claiming that Citigroup, Wells Fargo and J.P. Morgan Chase have all been issuing loans to African Americans at multiple-times the interest rates of other borrowers.

“This is a societal problem and an industry-wide problem,” observes Onuekwusi, who has been involved in the #IAM campaign alongside Gavin Lewis from BlackRock and Dawid Konotey-Ahulu, Founder of Redington. The initiative aims to humanise the lives and experiences of black people by encouraging people to post on social media three things that best describe them. Onuekwusi said he was a father, a listener and “determined to create change”. 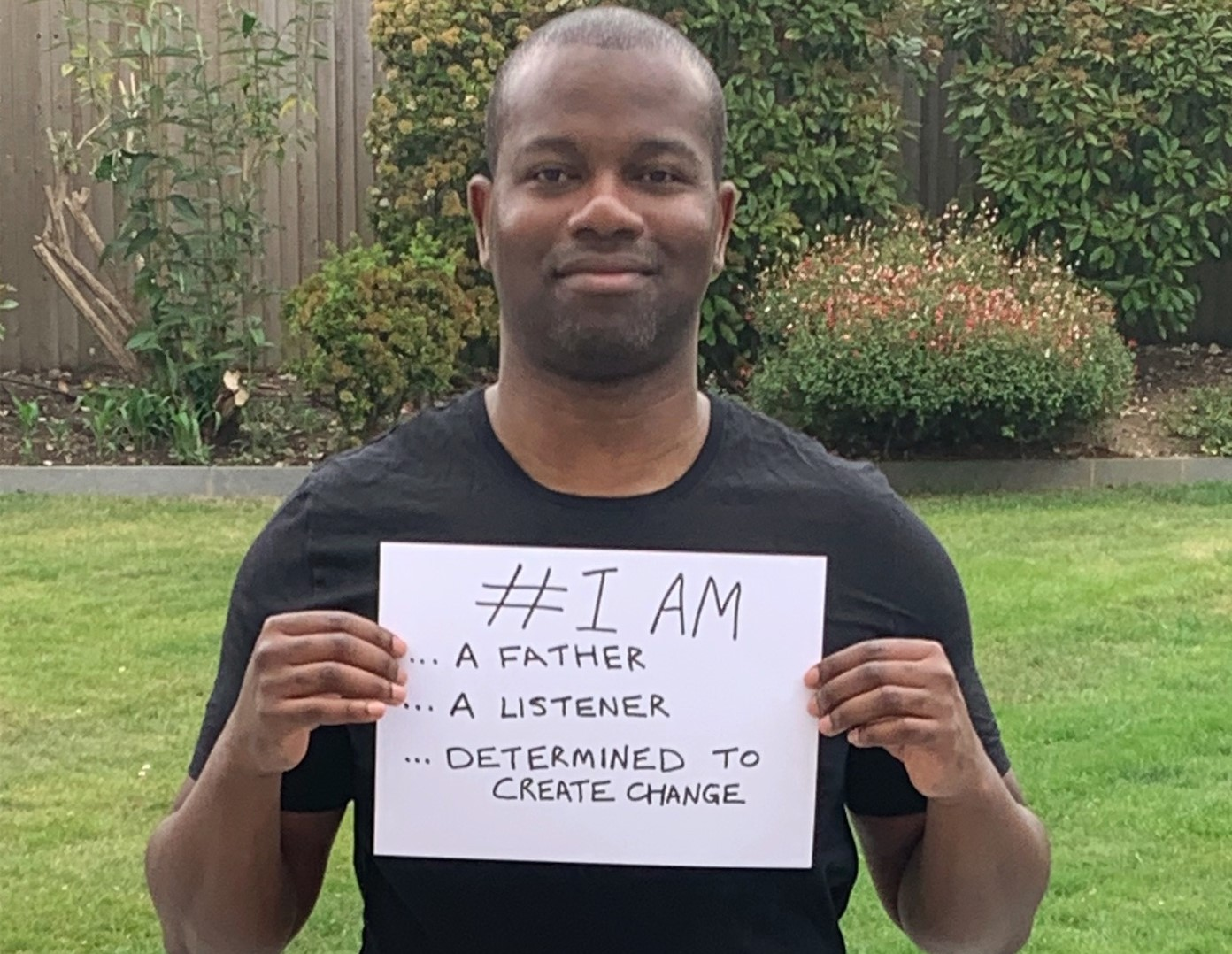 LGIM has also incorporated discussions of race and diversity into its monthly “lean-in” sessions, which are intended to encourage discussion between junior and senior employees. Onuekwusi hopes they will provide qualitative data to help LGIM work out how to increase representation.

“One of the biggest challenges we've had was trying to get our allies to be more vocal,” he says. “Five years ago, would have I been vocal enough to talk about my lived experiences of ethnicity, in the industry? The answer's no. There's no way I would have been brave enough to be able to speak out about some of the challenges that I've been through.”

“Being in a room of senior black people from across the industry, all willing and facing the same direction, has really empowered me. And empowered them as well, to really have a voice."