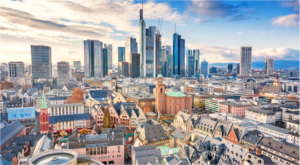 On the 26th of September, German voters will head to the polls in one of the most hotly contested elections since reunification. After a summer of catastrophic flooding in the country, climate change will be at the forefront of many voters’ minds as they enter the polling booth; and with Angela Merkel not appearing on the ballot for the first time in 31 years, their choice for her successor will have significant consequences for sustainable finance both in Germany and in the EU.

The current government is formed by a ‘grand coalition’ of the centre-right Christian Democratic Union and its Bavarian sister party the Christian Social Union (CDU/CSU), and the centre-left Social Democratic Party of Germany (SPD). However, the traditional dominance of the two largest parties has been thrown into doubt by a surge in popularity for the Green Party – and with Angela Merkel retiring after the election, the Chancellorship hangs in the balance.

The polls currently suggest that no two parties will receive more than 50% of the vote combined, meaning a three-party coalition may be needed to form a majority government. There are several possible combinations, including the so-called ‘Traffic Light Coalition’ between the Greens, the SPD and the centre-left Free Democratic Party (FDP) – whose party colours are red and yellow respectively – or a ‘Jamaica’ coalition, where the Greens and the yellow of the FDP are joined by the black of the CDU/CSU to form the colours of the Jamaican flag.

The current government created its Sustainable Finance Committee in 2019, composed of prominent figures from civil society, industry and finance. In February, that group issued its recommendations on how to bolster sustainable finance in the country – including rating all investment funds from 1 to 5 on their sustainability and creating a platform for collaborative company engagement.

On the back of those recommendations, the government issued a sustainable finance strategy – including a proposal to introduce a traffic light rating system for investment fund sustainability. While some welcomed the strategy (Christian Klein, Professor of Sustainable Finance at the University of Kassel, said at the time that it was “very ambitious”), the Green Party accused the government of “only half heartedly” taking up the recommendations.

Kristina Jeromin was Vice Chair of the Sustainable Finance Committee during her tenure as Head of Group Sustainability for Deutsche Boerse, and describes the strategy as “disappointing”.

“In my opinion it is not a strategy, because [the topics covered] are really not as ambitious as the recommendations we made, and lack a timeline for their implementation,” she tells RI.

Other members of the Committee share her disappointment. Fellow committee Vice Chair, Silke Stremlau, who is also a director at pension fund Hannoversche Kassen, said that some parts of the strategy remain vague. “It’s not really clear what they are willing to do now – what their plan is – and it’s not too ambitious”.

Angela McLellan, Managing Director at the FNG, the German, Austrian, Liechtenstein and Swiss Sustainable Investment Forum, agrees, telling RI that, although the national strategy did take up many of the recommendations, “it remains very vague on the implementation and therefore has a lower level of ambition”.

Jeromin has now ended her 15-year career in finance to stand as a candidate for the Greens in Hessen – the state that houses the country’s financial centre, Frankfurt.

One of her motivations for making the switch to politics is her belief that Germany is “behind the curve” on sustainable finance, and needs a clear regulatory framework to complement the existing expertise within its financial sector.

“We see that German players within the financial sector seem to get left behind in the general movement of the European financial centre – and of course also from the perspective of international finance centres”, she says.

The Sustainable Finance Strategy could help, she adds, by providing next steps; and further reforms could be brought into the mix, such as fiscal policy and the role of insurance companies in fostering sustainable finance.

While domestic sustainable finance strategy is a priority for some, German fund association the BVI believes the next government should focus on using its influence at EU-level to shape sustainable finance regulation, rather than creating "a special national path".

In August, German financial regulator BaFin launched a consultation on sustainable fund rules to a poor reception from industry bodies, who criticised it for being confusing and adding additional requirements for market participants on top of already complex EU-wide regulations.

Union Investment told RI that it agreed with the BVI’s position on EU regulations. The €427bn asset manager’s CEO, Hans Joachim Reinke, has previously said that it is “crucial” that regulation is carefully coordinated on the European and national levels and called for consistent design of sustainable finance measures, warning that duplicated or conflicting regulatory standards could slow the further development of sustainability in German finance.

Christoph Klein, Founder of ESG Portfolio Management and a former head of ESG at Deutsche Asset Management – now DWS – believes that a new government should turn its attention to getting public pension funds, encouraging them to work with local sustainable finance managers to foster the industry in Germany. It's an opinion echoed by Hannoversche Kassen’s Stremlau, who says Germany's public investment funds should be doing more on ESG: “In most public portfolios there are some basic ESG criteria but there is not a comprehensive ambitious approach and I think there’s no compatibility with Paris-alignment […] there’s room for improvement”.

This is already starting to change, however. The Bundesbank, which runs most of the country’s public pension assets, is shifting €9bn into strategies tracking indices that align with the EU’s new rules for climate-aligned benchmarks. The move is being made on behalf of  two civil service schemes (Versorgungsfonds des Bundes and Versorgungsrücklage des Bundes), the fund for the Federal Employment Agency (Versorgungsfonds der Bundesagentur für Arbeit) and the provident fund for long-term care insurance (Vorsorgefonds der sozialen Pflegeversicherung), but it’s hoped it might encourage similar decisions by other players in Germany.

What the parties promise

McLellan’s FNG has produced an overview of the sustainable finance policies of major German parties currently fighting for power. All apart from the far-right Alternative Für Deutschland – which did not respond to FNG’s questions – agreed on the importance both of sustainability in finance, and of finance in the fight against climate change.

On some issues, the parties that will potentially form the Traffic Light Coalition – the SPD, Greens and FDP – broadly agree. They are all favourably disposed towards the EU’s Sustainable Finance Disclosures Regulation, for example, with the Greens describing it as “an important brick in the road to sustainable financial markets”.

But there are some differences, too. Both the Greens and SPD think public investment funds should ditch fossil fuels, and that German development bank KfW should promote sustainability abroad (something it already does). The FDP is more conservative, agreeing that the public sector should be a role model for sustainable finance, but shying away from any mention of fossil fuel divestment.

Both the Greens and FDP are critical of the EU taxonomy, but their objectives pull in opposite directions: the FDP wants to encourage “a faster pace of innovation” by letting investors decide what they think is sustainable, while the Greens want a framework based on scientific evidence and not political preference.

Germany's last election, back in 2018, was followed by more than four months of political wrangling before a new coalition could be agreed. The same process will have to take place this time around, so it's unclear which version of the government will head to Glasgow in November for COP26. But whatever the time frame, the new coalition will be at the helm for a crucial period of development for sustainable finance in Germany, Europe and the world.