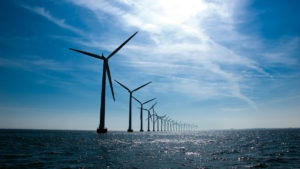 The wind industry is past its growing pains. It hardly needs subsidies anymore and is showing much better returns on invested capital and free cash flow generation. It’s finally investment worthy.
In 1991, the No. 1 song ‘Wind of Change’ by German rock band The Scorpions earmarked the celebration of glasnost in the Soviet Union and hope for a better future now that the Cold War had ended. In that same year, another wind of change was blowing in Vindeby, Denmark. That year, the world’s first ever commercial offshore wind farm was installed 2 km off the coast. This was ground-breaking at the time. Not only did it boost offshore wind power development, it also sparked renewed interest in the use of onshore wind. Once again wind was heralded as the future of energy solutions.

But alas, like so many other alternative energy hopefuls, wind energy first had to go through an agonizing hype cycle before being taken more seriously. Especially in the 2000s, numerous players rushed out to build capacity, almost destroying the industry by its own success. Nobody could keep his head above water, and when the global financial crisis hit, lots of wind turbine manufacturers got wiped out. However, this painful process actually led to massive restructuring and a better market environment overall. Today, the wind industry is past its growing pains, showing much better returns on invested capital (ROIC) and free cash flow (FCF) generation. In other words, it’s finally investment worthy.

Necessity is the mother of invention
It is no coincidence that Denmark is the birthplace of wind power development. As the official website of Denmark puts it: “Some countries are blessed with an abundance of natural resources such as oil, metals or gold. Denmark has the wind. Lots of it”. Starting with the first commercial 30 kilowatt onshore turbine (developed by national champion Vestas), over three decades later ‘wind’ is Denmark’s biggest export success. The Danish government has huge ambitions. The country even wants to be 100% fossil fuel free by 2050, with wind energy making up the bulk of its energy supply.

Becoming number one is easier than remaining number one. Being a first mover (and staying ahead) in the wind industry means Denmark has put high priority on innovation and human capital management. Extensive R&D programs geared to wind technology are pioneered by both companies and universities. Policy makers, academics, turbine producers, transportation companies, utilities and servicing firms, are all aligned in an effort to keep Denmark a world leader in wind power technology.

Innovation = key
Danish wind posterchild Vestas is a good example of a company where R&D remains high on the agenda. For example, it develops new composites for better torque transmission, looks at weight reduction by using ultra-flexible carbon blades, and collects data for performance analytics from the turbines. Lots of data. Imagine over 30.000 wind turbines monitored with 500 data points coming in every 10 minutes. Sophisticated software to analyze this data enables Vestas to better control the optimal load and power modes (i.e., improve energy production). A decade ago, its wind turbines were only productive 20% of the time; now it’s close to 40%.The economic payback period for most wind turbines ranges from around five to eight months. In other words, five to eight months are needed to produce the total energy needed for the construction, positioning, connection, maintenance and eventual dismantling of the turbine. For example, Vestas’ state-of-the-art V112 3.3MW turbine has a payback period of six months in normal wind conditions. Over its lifecycle, it will return 35 times more energy back to society than it consumed. So when 1 kWh is invested in this wind energy solution you get 35 kWh in return, whereas if you invest 1 kWh in coal-fired power generation you typically get 0.3 kWh in return. And, a single Vestas wind turbine has CO2 emissions of around one percent of what a coal power plant emits.

Addicted to subsidies? Not anymore.
So now that we’ve concluded our ad for Denmark Inc., it’s time to see where we actually stand with wind energy as a champion for a brighter tomorrow. Technological improvements have turned wind into a competitive alternative to conventional energy sources. In most cases, the cost of electricity for onshore wind power is even on par with gas or coal plants (EUR 35-45/MWh). Also, don’t forget that for a coal plant to keep running, you still need to buy coal for the next 30 years. And mind you, hefty CO2 taxes will probably have to be paid down the road as well…

The era of subsidies for wind energy is slowly coming to an end. In fact, the only reason why subsidies are still needed is because the ‘old’ conventional technologies are almost fully depreciated, hence operate against lower costs. The subsidies are actually used for the end-customer (e.g. a utility) that needs to invest in transmission infrastructure, as wind parks might be located quite far from the utility and its distribution network. An important incentive scheme in place is the Production Tax Credit (PTC) in the United States. As the PTC makes it very attractive for developers to start new projects, the wind market will continue to enjoy significant tailwinds in the coming years. No pun intended.

Offshore wind freakonomics
A critical precondition for wind energy to work is to have… wind. Even though turbine manufacturers have become much better at developing turbines that also rotate in low wind speed conditions, we still need enough wind. Moreover, wind turbine companies are contractually obligated to deliver a certain amount of electricity. So if the wind doesn’t blow, they are forced to purchase electricity and deliver that to the utility.

Fortunately, offshore areas come to the rescue here. In the North Sea, for example, we have an average Beaufort wind force of 6-7, perfect for a wind turbine. On a side note, these wind speeds are less ideal if you’re planning to actually visit an offshore wind site by boat, as your author unsuccessfully attempted to do recently…

In theory, to meet the annual electricity needs of all (!) households in the Netherlands, one needs to install about 3,200 offshore 6MW turbines, spread out on a surface of 40 by 40 km. But, OK, 100% coverage of those households might be a stretch, so let’s assume 20% is more reasonable. That still ‘only’ demands 640 turbines, or roughly a doubling of today’s Dutch offshore wind fleet.

The rationale for offshore wind power is clearly there, it just boils down to better economics. Taking our example of the Dutch energy needs, it would still cost about EUR 12.8 billion to double the existing Dutch offshore wind capacity. But also here, we’re heading in the right direction. In June 2016, Danish DONG Energy (again, those Danes!) won a major bid to build two offshore wind farms off the Dutch coast at a cost of EUR 87/MWh. This beats the last record set by Swedish energy giant Vattenfall of EUR 103/MWh in 2015. This rapid fall in costs supports a further build-out of this promising segment.

Growing pains
Now that we’re out of the hype cycle and players have matured, what is the state of the wind industry today? Since 2005, global wind turbine installations have increased seven-fold from 60GW to 420GW at the end of 2015. New investments in wind energy have averaged around USD100 billion per year in the last five years (compared with USD 150 billion for solar). Wind still only constitutes around 5% of global electricity production, so there is plenty of room for further growth.

The wind industry, however, is still a fragmented place. The top five players – Vestas, GE, Enercon, Gamesa, Siemens – account for about 75% of the global installed base (ex-China), with a long tail of smaller players making up the rest of the market. In China, the landscape is even more dispersed and completely dominated by nineteen (!) domestic companies with a combined 98% market share. Ever since China implemented a ‘buy-local’ policy in 2004, the country basically turned into a no-go area for Western suppliers. This also works the other way around, making it very hard for Chinese players to enter markets such as Europe and the United States. Hence, the current wind industry appears to be fragmented, but stable.Green, lean, cash machine
Having gone through the boom-bust-cycle in the 2000s, most turbine manufacturers were in deep trouble at the start of this decade. Being overly focused on selling as many cheap, subsidized turbines as possible led wind players to issue many profit warnings, corporate debt to shoot up, and cash generation to vanish. Stock prices crashed. The wind market was almost destroyed by the overcapacity created from its own success.

Fortunately, the thematic support for wind energy never abated. Slowly, most turbine companies emerged from the ashes. They took the opportunity to clean up their balance sheets and rethink their strategies. Interestingly enough, the big buildout of wind parks meant the installed base had become quite meaningful, especially for the larger players. In fact, it seems like the wind industry is gradually turning into a classic razor blade industry by fetching high service margins from the installed base of turbines. On average, profit margins recovered from -7% in 2012 to +7% last year. Free cash flow has rebounded significantly and debt piles have turned into large net cash positions. A clear leader on all these financial metrics is Vestas, one of the portfolio holdings in the Robeco Global Equity fund.

Wind energy will remain a driving force of a more sustainable future. Offshore wind becoming more economic, continued coal plant retirements and improved grid storage solutions all act as long-term drivers. Record order backlogs and higher service content support solid growth and margin expansion. From a sustainability point of view, wind energy is an attractive theme to play. But now that companies’ business models are more sustainable and returns on invested capital and free cash flow generation have improved, ‘wind’ has become an interesting financial investment too. It seems the ‘wind of change’ has indeed arrived. And it’s here to stay.

Chris Berkouwer is an Equity Analyst at Robeco Asset Management.