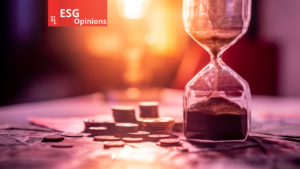 But climate risk management (CRM) is often erroneously conflated with seeking or achieving alignment with climate outcomes (ACO). While there is some overlap between CRM and ACO, they have different objectives and often different results.

CRM can make little or no contribution to ACO. For example, reducing a company’s exposure to projected increases in Country A’s carbon prices could entail moving emitting production to Country B, which has lower environmental standards, potentially increasing net carbon pollution overall. Or a company could hedge its exposure to projected increases in carbon prices through derivatives contracts such as swaps, which would not alter the underlying economic activities of the firm and thus have little or no impact on emissions. Or a retail investor could disinvest shares from a fossil fuel company listed on the FTSE 100, thereby reducing their exposure to climate-related transition risk, but this will make very little or no difference to whether the fossil fuel company becomes more likely to achieve ACO. Depending on who buys the disinvested shares, it could in fact, make ACO less likely.

Firms and financial institutions signing up to the TCFD may think that by doing so they are making a difference to the climate, when this is not necessarily the case.

This is not to say that CRM cannot, intentionally or unintentionally, result in better climate outcomes. A way to reduce Company A’s exposure to projected increases in carbon prices could be reducing the company’s carbon emissions, thereby helping ACO. A universal owner, such as a large pension or sovereign wealth fund, by advocating for timely and effective climate action by governments could potentially contribute to lower climate-related transition risks across their holdings if governments heed their advice. CRM and ACO can work together in specific financial products, for example, a bank providing a sustainability-linked loan. Company A secures a lower cost of capital from the bank if it achieves ambitious, predetermined carbon reduction targets. A lower cost of capital is possible because Company A has calculably lower credit risk due to less energy use resulting in lower energy bills and lower potential future carbon price liabilities. The lender can share some of that reduction in credit risk with the borrower, creating a win-win where the borrower secures a lower cost of capital and the bank makes more money.

These synergies between ACO and CRM are clearly important, and it makes sense to maximise them at every opportunity. But that is different from saying there is always a positive relationship between them both, or that CRM automatically and inevitably leads to ACO. It does not.

There is a risk associated with the accidental (or sometimes intentional) conflation of CRM with ACO. Firms and financial institutions signing up to the TCFD, for example, may think that by doing so they are making a difference to the climate, when this is not necessarily the case. Policymakers and civil society groups may have unintentionally made this mistake easier to make, by hyping-up one CRM framework, the TCFD, in a way that is disproportionate to its potential climate impact.

In December 2020 it will be five years since the TCFD was announced on the sidelines of COP21 in Paris. Progress has been made, but it also highlights some of the challenges of relying on disclosure as a theory of change. Even if every economic and financial actor signed up to the TCFD and implemented it perfectly, we would still not have global ACO. And, of course, the idea that we will secure comprehensive or effective TCFD implementation globally anytime soon is naïve. It will take many more years to achieve anything like global coverage for some of the most basic climate-related information disclosures. In an area where time is of the essence – we must achieve net zero emissions by mid-century to deliver Paris, and physical climate-related risks are already having a material impact – this is deeply unsatisfactory.

Instead of incidentally contributing to ACO through CRM initiatives like the TCFD, we need specific ways of dealing with and contributing to the challenge of alignment. These need to be articulated, developed and scaled across the financial system rapidly. Without rebalancing the distribution of effort and spending more time explicitly on ACO, we cannot ever hope to align finance and the financial system with climate change objectives.

What should we do? First, we should lock-in and continue to build on the critically important CRM work, including the TCFD. That includes making TCFD mandatory, but must also include a range of potentially much more important things for CRM, including: updating risk-based capital adequacy frameworks so they take account of climate-related risks; spurring the next generation of data and analysis capabilities required to properly measure and manage such risks; and changing supervisory expectations globally so all supervised firms, from asset owners to insurers, need to action climate-related risks at the board and senior management-levels or risk supervisory action.

Second and in parallel, we need to urgently open up new frontiers for ACO, of which there are many. But perhaps the single most significant thing we can do to spur rapid ACO is to make net zero targets and transition plans mandatory for all financial institutions. This can and should start in the UK.

The UK is hosting the next major UN climate change summit (COP26) in Glasgow in November 2021. This must be a tipping point for greening the financial system. New commitments at COP26 should amount to the most significant ever from financial institutions on climate, and demonstrate the collective intent for massive material change in future financial flows, as well as the widespread adoption of financial practices that actively support the transition to net zero at the pace and scale required.

COP26 provides a unique opportunity to mobilise ambitious action from across the financial system. In 2021, in the same way that governments will have to make new five-yearly climate targets under the Paris Agreement, financial institutions (as well as companies and other non-state actors) could be asked to do the same, with subsequent annual reporting of progress. This would be voluntary for all, but there is a strong case for the UK to lead by making such targets and plans mandatory for UK non-state actors, particularly for financial institutions, prior to the summit.

The destination, net zero by 2050, is already law in the UK. The challenge is getting all parts of society to contribute to and think constructively about how we get there. Getting financial institutions to do this systematically will shift capital allocation and spur companies to adopt transition plans, and it would also accelerate UK leadership in sustainable finance.

The transition underway is the most capital intensive in human history and the UK financial services sector has all to gain. Net zero alignment for the financial services sector will create demand for packages of new financial products and services to help companies transition, as well as create demand for new ways of measuring performance using the latest earth observation, AI, and data science methods. Both of these are areas, among others, being pioneered in the UK.

Mandatory net zero targets and transition plans for financial institutions can help the UK lead the way, while also helping to deliver domestic climate targets. The UK is also uniquely placed to help green the global financial system. As the world’s largest international financial centre, if the City of London moves, others will follow. This would be a sensitive intervention point, where a modest change can create disproportionate benefits for and non-linear growth in climate action. This is exactly the sort of thing the UK should be doing as a world-leader on climate change and the time to consider this is now in the build-up to COP26.