For many years, holding companies accountable on supply chains was bedevilled by disagreement about the meaning and scope of ‘complicity’. The debate is reflected in the continuing disputes of international parent companies, such as Shell and their foreign subsidiaries, over the extent to which – outside the parent company/subsidiary relationship – they should be held legally liable or accountable for entities which provide them with goods and services. An obvious example is the extent to which major chocolatiers such as Nestle, Cargill, Olam, Mars and Kraft, should be held liable for the trafficking of children or child labour and human rights abuses perpetrated by independent cocoa plantation owners in Africa.

One of the key policies developed in recent years to try to make international parent companies and their foreign subsidiaries more accountable for their acts and omissions is the concept of the supply chain. There are many variations, but at the core of supply chain legislation is a legal requirement that a company carries out due diligence – sometimes limited to environmental impacts and human rights – of other companies and firms which provide them with goods and services. This supply chain concept is widely applied and contained in national, supranational and international laws and legislation. Obvious examples are The US Dodd-Frank Act, the California Transparency in the Supply Chain Act, the UK Modern Slavery Act 2015, the EU Action Plan on Sustainable Finance and the German Lieferkettengesetz. Some of these, like the UK Modern Slavery Act 2015, are symbolic window-dressing. Others, such as the German law, allow for swingeing fines of up to two percent of a company’s annual revenues!

What has not been clear until now in respect of supply chain legislation and policy initiatives has been the extent to which professional suppliers of services such as business consultants, accountants and law firms could become enmeshed in the nets of a deep-sea trawl of corporate misconduct. That is until McKinsey & Co., the bluest of blue chip professional advisers, were gibbeted and left swinging in the wind over their role in the sale of opioids in the United States.

The sad history of OxyContin and the opioid pandemic in the United States – almost half a million deaths attributed to opioid overdose from 1999 – 2019, and rising – and the role of Purdue Pharma in pushing those opioids is well-known: the trillion dollar Class Action lawsuits, the $2.2billion fines, the bankruptcy of the company and the apparent immunity of the Sackler family from prosecution.

What is less well-known is the role of companies such as McKinsey & Co. and Walmart, which played important roles in advising on the marketing and in the distribution of OxyContin. The liabilities of Walmart, if any, are still to be determined. The spotlight on the OxyContin supply chain, and this should be a sobering reminder to professional advisers, is on McKinsey & Co., which advised Purdue Pharma on how to boost sales of OxyContin by “turbo-charging the sales engine”. According to the many lawsuits brought against it by State Attorney-Generals, that strategy focused on Purdue Pharma sales representatives pitching the benefits of opioids to doctors directly to increase prescriptions.

According to the Financial Times, Letitia James, the robust New York Attorney-General, said McKinsey’s recommendations were “cynical” and “calculated” and they “knew where the money was coming from and zeroed in on it”.

Under the terms of McKinsey’s $574m settlement with 49 States and several other US Districts and territories, McKinsey agreed to ante up without admitting any wrongdoing or accepting legal liability. In return for the money, the States issued a vacuous statement acknowledging McKinsey’s “good faith and responsible corporate citizenship”. Kevin Sneader, McKinsey’s then Global Managing Partner, issued a letter to employees explaining that it had settled to avoid a long legal process, adding that he was not proud of this chapter in the firm’s history.

There were a number of high profile McKinsey casualties, including Sneader himself, voted out of his role by the 650 senior partners. The last time the partners refused an incumbent Managing Partner a second term was in 1976. It is understood that Sneader did not make it as far as the final round of balloting.

Two other partners were fired on the basis of email traffic that pointed to less candour in disclosing documents and emails.

Working on the supply chain gang

The McKinsey case is the stuff that Harvard Business School case-study dreams are made of.

It is also a wake up call for professional advisers in law firms, accountancy practices and consultancies. Where the US leads others will follow the money: multi-million settlements to avoid prosecution, fines for misconduct based on revenue or turnover, bans on procurement eligibility. Senior partners should be having sleepless nights worrying if their more adventurous or gung-ho partners pour gasoline on the flames rather than restrain the avarice of their clients.

Advisers, as McKinsey found out to its great cost, are now in a supply chain which links them legally, or otherwise effectively, to the conduct of their clients. The debate is just beginning about whether law firms and other professional advisers, having committed to undertakings around diversity and inclusion, climate change and gender equality, can then continue to represent clients such as Big Oil, Big Pharma and Big Chocolate, which have a mixed record on human rights, climate change/Net Zero, deforestation or environmental and social impacts more generally. For senior partners and service providers everywhere struggling with the new corporate world and wondering what the noise is around ESG, it’s  the sound of gangs of lawyers working on the supply chain liability issue! 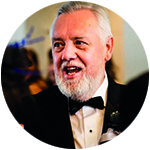 Professor Paul Watchman is with The Blended Capital Group. Paul will be talking at the RI Europe conference on June 18 at 10.10am BST on the Deep-dive 8 panel: Due diligence and supply chains in focus: can investors drive transparency and change where it’s needed?