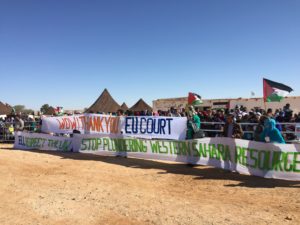 Last month I went to Smara, a Saharawi refugee camp near Tindouf, Algeria. After a year following the exploitation of Western Sahara’s natural resources from the RI newsroom in London, a rare opportunity arose to travel there to run the Sahara marathon and learn more about the people that are hidden behind the news stories of resource exploitation and project finance.
I was putting a human face to a ‘financial’ story. Like Talya Abdelhay, the head of a Saharawi family I stayed with, one of an estimated 170,000 refugees who have been waiting to return to their homes in Western Sahara, which they fled 42 years ago when Morocco occupied it. For those who stayed under Moroccan rule, life is not much easier, according to frequent reports of human rights violations by different humanitarian organizations. It is doubtful that these families stranded in the desert on the Algerian border have benefited from the $3.68 billion in revenues reported in the year to September 30, 2017 by the Office Chèrifen des Phosphates (OCP), a Moroccan state-owned company that mines and exports the phosphate-rich reserves in the occupied Western Sahara.
As Khadja Bedati, a 20-year-old student, told the Siemens AGM in January this year: “The value of three shiploads of phosphate is about the same as the humanitarian aid received by the Sahrawi refugees in one year”. When I called her, ahead of my trip to Smara, she said this applies to renewable energy projects too.
Bedati, who was born in the Sahrawi refugee camps but lives in Germany, spoke on behalf of the indigenous Sahrawi Youth Union body, UJSARIO, to challenge a Siemens deal to supply 22 wind turbines built for a wind farm in Western Sahara.
In Smara, I met with members of another youth organisation, UESARIO (the Sahrawi Students’ Union), on February 27, ahead of events scheduled for that day, which commemorated the 42nd anniversary of the proclamation of the Sahrawi Arab Democratic Republic (SADR).“We are proud of our achievements,” Sidhamed Youly, a UESARIO member, told me in Smara’s main square, referring to their campaigns on natural resources exploitation. Their expectations were focused on an important judgement of the Court of Justice of the European Union, which that very same day would rule that the Fisheries Agreement between Morocco and the EU does not apply to the waters off the coast of Western Sahara.
The Advocate General of the Court, Melchior Wathelet, had in January issued a non-binding opinion considering Morocco “the occupying power”. Wathelet said the Fisheries Agreement was invalid as it was non-compliant “with the rules of international human law applicable to the conclusion […] of international agreements applicable on the occupied territory.” Link
When news of the favourable ruling emerged before 10 am, UESARIO members staged their protest with a big placard (“Wow! Thank you, EU Court. EU, respect the law. Stop plundering Western Sahara resources”), which was displayed when the SADR President, Brahim Ghali, commenced his speech. Another protest was scheduled for the next day, in the so-called ‘liberated territories’ nearby to the Northern limits of the 2,700 km wall that divides it from the occupied Western Sahara. I joined a convoy of about 60 people who were to attend the protest. Once there, I talked to Jalihena Mohamed, a UESARIO leader, whose work focuses on natural resources exploitation.
With a Moroccan garrison behind him in the distance, Jalihena Mohamed took issue with the renewable energy projects – wind and solar farms – that Morocco is building in Western Sahara.
While not opposed to green energy, he said such projects contribute to violating other rights and blocking the self-determination referendum. The projects, he said, are providing “financial oxygen” and “powering Morocco’s illegal occupation”, all without the consent of the Saharawi representatives. Regardless of one’s views

on the Western Sahara situation, Mohamed’s concerns represent the potential clash between E, S and G factors, which can be difficult for investors particularly when indigenous rights are at stake. The clash was alluded to in the COP21 Paris Agreement as the Just Transition, a caveat against so-called ‘green supremacy’ where anything is acceptable in the name of GHG reduction targets. A case study has been the green bond issued by the Moroccan Agency for Solar Energy (Masen) in a private placement with national banks to finance solar projects in Laayoune and Boujdour within occupied Western Sahara. Vigeo Eiris, the ESG research company, provided a second opinion on the green bond. See previous RI reports:

The case illustrates how the boundaries and expectations in responsible investment are evolving due to stakeholder pressure, requiring all players in the chain to perform more demanding ESG due diligence. So far, those who still conduct business in Western Sahara (or provide support as part of the supply chain) have argued that they are not breaking any laws.
Depending on who uses it, the argument ranges frombeing flawed, self-serving or unjustifiable for three reasons. First, it is argued that local people don’t need to be consulted if the business activity is perceived to be in their interest.This is often based on a legal opinion issued in 2002 by Hans Corell, Former Under-Secretary-General for Legal Affairs and Legal Counsel of the UN, which analysed the legality of some mineral resources exploration contracts. The opinion stated that while “not in themselves illegal, if further exploration and exploitation activities were to proceed in disregard of the interests and wishes of the people of Western Sahara, [the contracts] would be in violation of the principles of international law,” However, at an academic conference in 2008, Corell clarified his opinion, saying: “It follows that Morocco would have to engage in proper consultations with persons authorized to represent the people of Western Sahara [Polisario] before such activities would be allowed”.
More recently, Corell wrote in an article that the EU-Moroccan Fisheries Agreement also applies to other natural resources “be they renewable or non-renewable”.
In the same article from 2015, said that contracts signed between Morocco, Kosmos and Glencore for oil exploration and exploration did not conform with his 2002 legal opinion (Kosmos, still claims it is).
Corell wrote: “Already signing an agreement in which Morocco refers to Western Sahara as “the southern provinces of the Kingdom of Morocco” is at variance with Corporate Social Responsibility and the principles Protect, Respect and Remedy.”
Second, the failure of the international community to provide for a solution has led Polisario and SADR to switch tactics from diplomacy to the courtroom.

France (as well the US) would support Morocco almost blindly in the UN’s Security Council, and Spain has taken the ostrich head-in-the-sand approach since it relinquished its colonial influence. In contrast, the legal machine in civil courts is evolving and practitioners are changing the very same body of law used by some to formalistically justify their business activities in the Western Sahara. Apart from the rulings of the Court of Justice of the European Union and the previous 2015 legal opinion of the African Union (which declared illegal Morocco’s occupation and resource exploitation of Western Sahara), another key case was judged in South Africa in February. The South African High Court ruled that a disputed phosphate cargo of a vessel en route to a New Zealand port was property of the plaintiffs: Polisario and SADR. A similar case is pending in Panama.Third, even without legal pronouncements, responsible investment is all about going the extra mile and voluntarily pushing for best practice. A respectable SRI practitioner once told me that the constant but often underreported developments in the Western Sahara conflict are like sand moving through an hourglass. “Every grain that drops looks inconsequential, but the weight of all those grains dropping through the glass will make the balance shift,” they said. Saharawi refugees in Smara and other camps, particularly the youth, told me that they won’t spend another 42 years in the oblivion robbed of their future. Their patience has a limit and they are ready to take up arms, they said. Time is pressing for investors to decide whether they want to be part of the problem or part of the solution, before the sand shifts and the time for choices runs out.