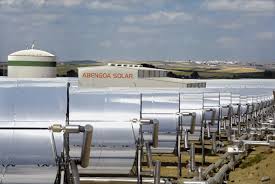 A 100MW solar plant backed by South Africa’s R1.43trn (€102bn) Government Employees’ Pension Fund (GEPF), Africa’s largest pension fund, has taken a major step forward with the announcement that financing has been secured and that a 20-year power purchase agreement has been signed.

The GEPF, via state-owned fund manager the Public Investment Corporation (PIC), is a partner in the Xina Solar One ‘solar thermal’ plant near Pofadder in the Northern Cape Province. It will provide power to Eskom, South Africa’s power utility.

The fund is a partner in a consortium alongside Spain-based developer Abengoa, South Africa’s development finance institution, the Industrial Development Corporation (IDC), and the KaXu Community Trust.

Seville-based, Nasdaq-listed Abengoa said it has secured project financing from the African Development Bank, the International Finance Corporation (IFC), the IDC and the Development Bank of Southern Africa as well as from private banks such as RMB, Nedbank and ABSA. Construction of Xina Solar One already begun and it is due to come online in the third quarter of 2017.It is adjacent to the 100MW KaXu Solar One project and, combined, they will be the largest solar complex in the continent.

The site uses mirrors to track the sun and concentrate solar radiation. In addition, it employs a five-hour thermal energy storage system.

The project is not the GEPF’s only solar investment. In June RI reported it was taking a 40% stake in what is expected to become one of the world’s largest concentrated solar (CSP) power plants, the 44MWp (megawatt peak) Touwsrivier project in the Western Cape developed by French technology firm Soitec. And in November 2013, the GEPF invested R132m in a 60MW solar park project being developed in the Free State province by New York-listed solar energy firm SunEdison.

Earlier this week Renosi Mokate, the former World Bank Executive Director who chairs the GEPF’s Board of Trustees, was elected to the Advisory Council of the Principles for Responsible Investment (PRI). The fund has been in the news over the dismissal of its Principal Executive Officer John Oliphant over misconduct charges.