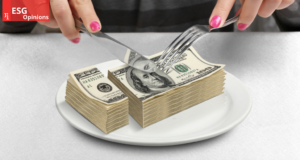 Having played a fundamental role in the global response to the climate crisis, institutional investors must now, in the wake of Covid-19, play a similarly forceful role in tackling the global nutrition crisis. The pandemic has reinforced the need to rethink diets. Even before it struck, unhealthy diets posed a greater risk to individuals’ morbidity and mortality than the combined effects of unsafe sex, alcohol, drug and tobacco. Morbidity from Covid-19 has been higher among the overweight and those with diet-related diseases. Though more than 820 million people were undernourished prior to the pandemic, the UN World Food Programme has issued stark warnings that millions more will face acute food insecurity and hunger.

The long-term economic impacts are substantial

Poor diets have two key economy-wide effects: the drag on nations’ long-term economic growth and the impact on government spending on health. A recent Chatham House report found that businesses in low- and middle-income countries collectively lose up to $850bn a year due to malnutrition-related productivity reductions, equivalent to 2.9% of those economies’ combined GDP. World Bank analysis showed the economy-wide costs of undernutrition due to lost national productivity and economic growth were up to 11% of GDP in Africa and Asia each year. OECD analysis predicted a 3.3% average GDP reduction in its member countries between 2020 and 2050 due to lower employment and reduced productivity caused by overweight.

A proposed Framework Convention on Food Systems, modelled on the UN conventions on tobacco and climate change, would regulate unhealthy foods, redirect subsidies away from red meat and corn, and increase taxes. It would also exclude the food industry from policy development.

Though consumer demand for healthy foods is increasing, governments are regulating

Consumer demand for healthier food is increasing. Many companies are investing in creating healthier products, either to capitalise on the predicted 2020-2024 6% compound annual growth rate opportunity or in response to government reformulation targets. Their aim is to reduce salt, sugars and fats while maintaining good texture and taste, and boosting levels of fruits and vegetables.

Nevertheless, governments are taking regulatory action to accelerate the transition to healthier diets. Evidence shows that diets are primarily shaped by food environments NOT by individual choices or lack of willpower. In other words, the problem is systemic, requiring alterations to how food is formulated, labelled, marketed, priced and distributed. Regulation poses risks to returns and investments in this sector. As ever, investors must work out who the winners and who the losers will be, and back the winners.

Governments all over the world are introducing sugar taxes; there are now over 44 sugar taxes more than the 31 carbon taxes in place. Analysts expect other countries to introduce sugar taxes in the short term and expand their scope to categories such as biscuits, cakes and breakfast cereals. Mexico’s 10% tax on sweetened drinks introduced in 2014 reduced consumption of sugary drinks by 7.6% within two years; its 8% sale price tax on energy-dense foods (more than 275 calories per 100 grams) reduced non-essential food purchases by 8%.

Marketing restrictions on unhealthy products are increasingly prevalent, with the introduction of health warnings on unhealthy food and drinks products similar to those placed on tobacco. In 2016, Chile introduced a law limiting cartoon food packaging, preventing schools selling unhealthy foods, restricting TV adverts, banning promotional toys and mandating large black cigarette-style warning labels on unhealthy foods. Late last year, the UK government announced its intention to restrict promotions of unhealthy foods in England, while in 2019 Transport for London restricted adverts of unhealthy food and products across its network. Child protection measures range from the introduction of the 9pm watershed for fast food TV and online advertising in the UK, through to 35 countries imposing restrictions on sugar sweetened beverages in school. Australia’s Queensland government has restricted the salt, sugar and fat content of food or drinks that can be promoted via over 2,000 outdoor advertising spaces.

Further regulation seems very likely. In 2019 public health experts proposed a Framework Convention on Food Systems, modelled on the UN conventions on tobacco and climate change. It would regulate unhealthy foods, redirect subsidies away from red meat and corn, and increase taxes, in a bid to shift consumer behaviour towards healthy and sustainable food. It would also exclude the food industry from policy development.

Investor interest in nutrition is building

Perhaps unsurprisingly, then, investor interest in nutrition is mounting. Many now understand that poor diets are a critical social issue that need their attention. They see potential to support delivery of Sustainable Development Goals 2 & 3 (see picture) and to contribute to the realisation all of the SDGs. They are demanding more transparency on companies’ nutrition governance and strategy, and particularly on the ‘healthiness’ of their products and over portfolios.

Since its launch in 2013, the not-for-profit Access to Nutrition Initiative (ATNI) has been publishing indexes that provide investors with this information. ATNI scores and ranks food and beverage companies’ performance on addressing all forms of malnutrition. Critically, each Index includes a Product Profile – independent analysis of the healthiness of companies’ product portfolios. ATNI rates companies using the Health Star Rating. Establishing a global consensus on the use of one such metric that all stakeholders use as a consistent definition of healthy products to compare companies’ portfolios and progress is critical to this agenda. ATNI expects to publish its next Global Index in June.

To support investors’ research and engagement, ATNI developed the Investor Expectations on Nutrition, Diets and Health. Now backed by more than $12trn in AUM, this figure is expected to increase over 2021, a year when nutrition will come to the fore on the international stage. The UN Food Systems Summit in September aims to launch bold new actions to deliver progress on all 17 SDGs, each of which relies to some degree on healthier, more sustainable and equitable food systems. This will be followed by the Nutrition4Growth summit in December which aims to secure commitments from stakeholders to tackle global malnutrition, including the business sector. ATNI hopes to bring the investor voice to bear at these important conferences.

Any investor keen to better understand the nutrition-related risks, impacts and opportunities facing the food and beverage sector, and supporting the delivery of SDGs 2 & 3, is encouraged to become an ATNI signatory. Benefits include access to an investor portal, with investment-relevant nutrition news and reports, and specialist support for bespoke and collaborative investor engagement. For more information, contact Investor.support@accesstonutrition.org

Rachel Crossley is an Advisor to the Access to Nutrition Initiative

Katie Gordon is an Advisor to the Access to Nutrition Initiative