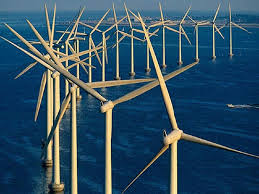 Meerwind was made possible by investment from Blackstone, which currently owns 80% stake of the park. WEG owns the other 20%. It came on stream in April 2014, supplying power to as much as 360,000 German households and saving 1m tonnes of carbon dioxide (CO2) emissions in the process.

Regarding the bidders, Handelsblatt said three groups had emerged. The first involves Allianz and Munich Re’s in-house asset manager MEAG; the second an infrastructure fund called Borealis backed by the C$72bn (€46bn) Canadian scheme OMERS; and third Macquarie.Bids from Chinese institutional investors are also expected, the newspaper added. Blackstone is being advised on the transaction by investment banks Bank of America and Jeffries as well as PJT Partners, a New York-based M&A advisor.

If Allianz and Munich Re were to acquire Meerwind, it would mark the first time that the two insurers have invested in offshore wind energy. The two firms have been Germany’s biggest investors in the space to date, with Allianz and Munich Re having allocated a respective €2.5bn and €1.5bn to renewable projects. Contacted by RI, a MEAG spokesman declined to comment on the insurers’ bid.

In other wind energy news, Denmark’s DONG Energy said it would construct the UK offshore wind park Hornsea. With a capacity of 1.2GW, Hornsea will be the world’s largest offshore wind farm upon completion in 2020. DONG’s decision came after the facility was guaranteed the right to sell power at fixed tariffs for the first 15 years of operation.