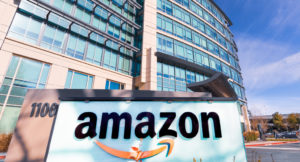 Amazon is facing accusations of hypocrisy after it was revealed today that the retail titan’s pension scheme is at odds with its own corporate sustainability goals.

A study by US-based shareholder advocacy group As You Sow claims that, despite its pledge to become Net Zero by 2040, Amazon’s $8bn+ 401(k) plan invests in fossil fuels and commodities companies linked to deforestation.

‘I’m sure when Jeff Bezos gazed down at planet Earth during his space junket and saw the Amazon Rainforest on fire, he did not say to himself, ‘I see that our 401(k) plan must be making terrific returns.’

As part of its new Corporate 401(k) Sustainability Scorecard, As You Sow assessed Amazon and telecom giant Comcast, claiming that more than half of the pair’s defined contribution pension assets are invested through Vanguard’s Target Retirement Funds’ default options. Other managers include BlackRock, Fidelity Investments and TIAA, it said.

“I’m sure when Jeff Bezos gazed down at planet Earth during his space junket and saw the Amazon Rainforest on fire, he did not say to himself, ‘I see that our 401(k) plan must be making terrific returns’,” said Andrew Behar, CEO of As You Sow. “That’s the point, no one knows what investments they own.”

As well as having exposure to high-emitters and companies accused of contributing to deforestation, the two schemes are alleged to have exposure to a slew of controversial sectors including private prisons, military weapons and tobacco – much of it through the Vanguard default funds.

Vanguard committed earlier this year to becoming Net Zero by 2050 as part of the Net Zero Asset Managers Initiative. In response to As You Sow's findings, a spokesperson told RI: "Vanguard takes its fiduciary responsibility very seriously. Our Investment Stewardship team, on behalf of our index fund investors, seeks to manage and identify ESG risks across our portfolio by engaging with company leaders and boards on risk oversight processes and effective disclosure, as well as through proxy voting."

Amazon and Comcast did not respond to requests for comment.

As You Sow, which plans to produce similar analysis for other S&P 500 companies, is urging firms to adopt sustainable default options for their 401(k) plans, or ensure sustainable strategies are clearly offered to employees.

Next week, it will launch a social media campaign targeting Amazon workers, highlighting their pension plan’s new scorecard and encouraging them to pressure the retailer to adopt a more sustainable approach to managing the assets.

This is not the first time Amazon’s ESG credentials have been called into question. Following media reports earlier this year that Amazon had tried to thwart workers’ attempts to form a union in Alabama, Swedish investors Folksam and Ohman Fonder convened more than 70 peers, managing some $6trn, to submit a letter to Amazon demanding it cease “all anti-union communications”.

Schroders reportedly removed Amazon from an ESG fund earlier this year on the grounds it didn’t meet their criteria of being a socially sustainable company.