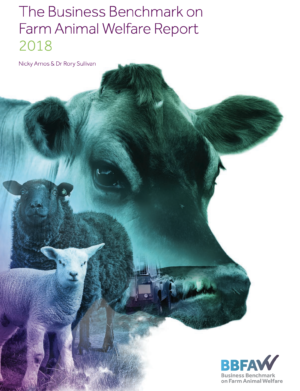 There are, however, also areas where progress is needed. Two stand out. The first is that 70 of the companies (acknowledging that this was the first year that more than half of the 70 were included in the Benchmark) provide little or no information on their approach to farm animal welfare. The second is that, despite 77 of the 150 companies (51%) now providing at least some animal welfare performance data, it is often not possible to understand how companies are translating policy commitments into action, nor is it possible to get an accurate picture of the welfare impact on animals.

Investors have played an important role in delivering the improvements that have been seen to date. Through the Global Investor Collaboration on Farm Animal Welfare and through their direct engagement with companies, they have encouraged companies to adopt policies, management systems and processes, and to start reporting on performance. Many companies have acknowledged the influence of investors on their approach to farm animal welfare. Given the large number of companies who still have to make substantial progress, investors continue to have a critical role to play in ensuring that companies develop and implement these policies and management systems.

So, what does this mean? The central conclusion is that investors need to take a more outcome-oriented approach to their engagement with companies, in particular with those companies who have established farm animal welfare management systems and processes. For these companies, the central questions are how are they delivering and demonstrating the real business benefits (e.g. better risk management, better reputation, new opportunities, innovation) and how are they delivering societal benefits (e.g. tangible evidence of improved welfare outcomes) from these systems and processes? These are also central questions for long-term investors.

The Benchmark is likely to play a key role in this process. The Benchmark itself is pivoting to a more outcome/impact- oriented focus, placing much greater weight on the impact of corporate behaviour on the welfare of animals farmed for food in global supply chains, rather than solely focusing on systems and processes. The Global Investor Collaboration on Farm Animal Welfare has already made this shift by taking a nuanced approach to its engagement with companies, pressing laggard companies to develop and implement systems and processes while encouraging leaders to maximise the business benefits of action on farm animal welfare.

To conclude, we believe the time has come to extend the conversation beyond corporate commitments and processes to one that critically examines the effectiveness of those commitments and processes in delivering necessary change. This change is essential if investors are to assess the quality of a company’s management systems and to answer questions such as whether a company is effectively implementing its policies, whether it is delivering on its objectives and targets, or whether it is meeting consumer expectations to safeguard the welfare of the animals in its operations and supply chain. Furthermore, it is only when there is clarity on performance that investors will be able to make meaningful performance comparisons between companies, and to understand which companies are leading on delivering positive animal welfare impacts and which companies are not.

1. BBFAW is the leading global measure of farm animal welfare management, policy commitment, performance and disclosure in food companies.
2. BBFAW also maintains the Global Investor Statement on Farm Animal Welfare and convenes the Global Investor Collaboration on Farm Animal Welfare, a collaborative engagement between major institutional investors and food companies on the issue of farm animal welfare.
3. The programme is supported by the BBFAW’s founding partners, Compassion in World Farming and World Animal Protection, who provide technical expertise, guidance, funding and practical resources. More information can be found at: www.bbfaw.com.