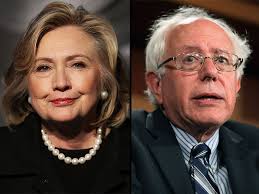 As the contest to be the Democractic candidate for presidency rolls across the US (during which I attended my first ever caucus), how do the two candidates stand on environmental, social and governance issues? And what we might expect if either of them were elected president this November?

The first issue of all on Bernie Sanders’ website is income and wealth inequality. He focuses on the top one tenth of one per cent and the 90 per cent and the widening income gap between them. While many of his proposed reforms are covered elsewhere, some of those specific to this issue include corporation tax reform, increasing the minimum wage from $7.25 to $15 an hour by 2020, and making it easier for workers to join unions. Hillary Clinton’s website also supports stronger unions and collective bargaining, but commits to a minimum wage rise to $12. Both are also in support of bringing the US into line with the rest of the western world by introducing paid family leave; Sanders goes further and calls for guaranteed holidays.
Both Sanders and Clinton intend to reform campaign finance by overturning the infamous Citizens United US Supreme Court decision. Sanders goes further, with reforms to regulate money in elections, introduce public financing for elections, insist on complete disclosure of political spending and eliminate political action committees (PACs). Clinton’s policies aim more to disclosure of money in politics, including the stalled SEC rule for companies to fully disclose political spending. She also plans to restore provisions in the voting rights act and implement universal, automatic voter registration for eligible 18-year-olds.
Sanders’ climate change plan ends with the statement: “because the wealthiest industry in the history of our planet has bribed politicians into ignoring science.” Policy initiatives cover reclaiming the government from the fossil fuel lobby, moving away from fossil fuels to clean renewables, reforming the electric and transport infrastructure and leading the international community to solve climate change and prevent conflict. Clinton aims to power every home in America with renewable energy by the end of her first term and to cut energy waste and oil consumption by a third through increased efficiency.
On racial justice, Sanders lists reforms to five types of violence against minorities: physical, political (such as disenfranchisement), legal (prisons), economic and environmental. Clinton has also pledged to end the era of mass incarceration, and includes policies on revitalising African American, Native American and Latino communities, on ensuring clean air and water doesn’t depend on your zip code, and on the disenfranchisement of the African American community. Both Clinton and Sanders will ensure women’s rights by fighting for pay equity and protecting reproductive rights.Sanders will sign into law a whole series of bills that make it illegal to discriminate against the LGBT community, including reforming health insurance, banks and other creditors, the police and schools. Clinton will fight for full federal equality of LGBT individuals, protect transgender rights, including in the military, and secure affordable treatment for those living with HIV and AIDS. Sanders aims to enhance disability rights by expanding social security programs and employment and educational opportunities, while Clinton also aims to improve employment opportunities and tax relief to those caring for disabled individuals.
One of Sanders’ key social policy issues is the introduction of single payer healthcare for all. It is one of a number of social policies that mark him out as both a progressive and a democratic socialist. As part of this he will fight for lower prescription drug prices, including ending many of the anti-competitive deals developed by the pharmaceutical lobby. Clinton too will target high prescription drug costs, but is committed to strengthening the Affordable Care Act, largely by extending tax credits to cover more of the cost of premiums and out-of-pocket expenses.
On Wall St, Sanders has introduced a “Too Big to Fail, Too Big to Exist Act” which would break up the big banks and is a co-sponsor of the Elizabeth Warren/John McCain bill to reinstate provisions to prevent banks from gambling with their customers’ money. He also aims to introduce a tax on Wall St speculation and high frequency trading that will fund free tuition for colleges and universities. On the wider corporate sector, he also plans to introduced legislation to prevent corporate inversions such as the one contemplated by the Pfizer merger with Allergan, to end the ability of corporations to defer tax on profits of offshore subsidiaries, to eliminate tax breaks for fossil fuel companies and to prevent corporations from claiming to be a foreign company by establishing a post office box in a tax haven country.
Although Clinton will give regulators the powers to downsize too large banks, she will also impose a “risk fee” based on their size and the likelihood of their contributing to another crisis. High frequency trading will also be taxed under Clinton’s plans. Good corporate behaviour will be enforced through individual and corporate prosecutions.
Sanders doesn’t have a specific section on gun law reform, but Clinton’s site covers a whole range of gun law reforms from background checks to banning assault weapons and, most importantly, repealing the law that prevents victims of gun violence from holding negligent manufacturers and dealers accountable.
While there are many similarities between their ESG policies, there is enough difference to make choosing between them a real choice. Next week: Trump, Cruz and Rubio on ESG.