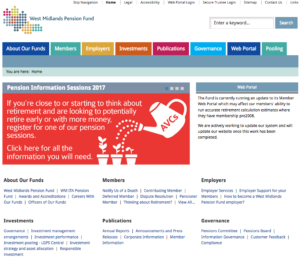 Councillors from Birmingham City Council, the West Midlands fund’s largest member, have passed a motion calling on it to divest from fossil fuels and focus future investments on areas that minimise climate change risk.

It followed lobbying from campaign group Divest West Midlands that mobilised local residents to engage with councillors on the issue.

Speaking to RI, Kay Edwards of co-ordinator of Divest West Midlands, said it would now lobby the six other councils who are members of the WMPF to pass similar motions.

The UK’s 89 local government pension funds are in the process of pooling their assets that will be managed by eight different pools.

West Midlands’ assets will be pooled with seven other local authority pension funds in central England to create the £35bn LGPS Central. In May, Andrew Warwick-Thompson, executive director for regulatory policy at The Pensions Regulator, was appointed chief executive of the new pool.

Joanne Segars, former chief executive of the Pensions and Lifetime Savings Association trade body, is its non-executive chair.“There are two other active divest campaign groups targeting local authorities that are part of the LGPS Central Pool,” said Edwards. “We have had initial conversations around coordinating. The new pooling presents quite an opportunity and more scope.”

In a statement, West Midlands Pension Fund said it was aware of the comments raised by councillors at Birmingham City Council, and will review the comments in line with its responsible investment update in September.

Birmingham City Councillor Roger Harmer, who tabled the successful fossil fuel divestment motion directed at WMPF, said if other councils in the area passed similar motions the fund would find it hard to ignore.

According to Harmer’s motion, West Midlands currently has over £393m invested in fossil fuels.

It comes as Geik Drever, who joined WMPF in 2012 from Lothian Pension Fund as director of pensions, this week announced her retirement.

Drever replaced predecessor Brian Bailey in the role; Bailey is now chair of governance advisory firm PIRC and is involved in developing ESG guidance for the new investment pools.