Twenty-six-year-old Marcela Rodrigues is showing me a photo of her father. In the picture Denilson Rodrigues boasts a youthful smile, but, in the east London hotel foyer where we meet, Marcela is fighting back tears. That smiling image of her father is how she tries to remember him. She tries not to think about the frontal part of his skull and right arm that were all that was recovered of him from the mud.

At 49, Rodrigues’ father was one of hundreds from her local community wiped out by 12 million cubic metres of toxic sludge when Brazilian miner Vale’s Brumadinho dam collapsed one year ago. RI wrote at the time that it was a litmus test for responsible investment. Just four years before, in the same region of Minas Gerais, the Fundão dam, owned by BHP-Vale joint venture Samarco, had collapsed killing 19. Back then, investors said they would engage. Fast forward to now, and Rodrigues carries a total of 272 photos of the dead and missing from the region’s second deadly dam failure; among them, mothers, sons, sisters, unborn babies. 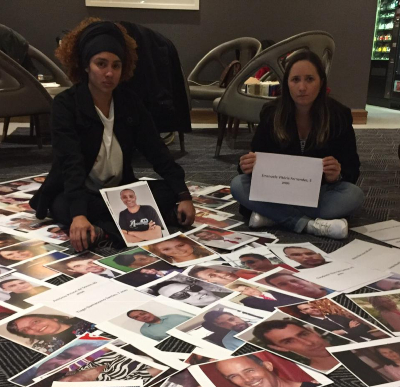 Marcela Rodrigues (left), with a photo of her late father Denilson Rodrigues

Last week, those same photos lined the walls of the assembly hall at Church House – the home of the Church of England Pensions Board – packed with investors, mining companies, journalists and NGOs. Alongside the Swedish AP funds, the CofE Pensions Board has spent the last year rallying investors around the issue, with Director of Ethics and Engagement Adam Matthews the public face of the initiative. The Investor Mining and Tailings Safety Initiative first bore fruit in April, when it delivered an ultimatum to extractive companies requesting disclosure on tailings storage facilities. At the summit last week, we gathered to hear about another milestone for the group: the launch of a database mapping the tailings dams that have been disclosed so far.

The pictures of the lost loved-ones were just one sign of that this is a values-driven engagement of a kind arguably rarely seen even within the responsible investment community.

The day started with a vigil for the victims. Former Brumadinho resident Angelica Amanada Andrada, whose sister was killed in the disaster, spoke at length about the effects on the community.

Matthews says it was important that the community’s perspective was at the heart of the summit and the wider engagement. “We really acknowledge the human consequences of what's happened,” he says. “Brumadinho is a disaster. It really shouldn’t have happened…We're really trying to have a process which reflects the magnitude of the issue here and assures that this kind of thing doesn't happen.”

This hasn’t stopped investors and other finance players of all stripes getting involved, with mainstream investment players like BlackRock and HSBC Asset Management joining insurers, responsible investment stalwarts and smaller faith-based outfits.

Matthews says it’s not just values that are the impetus for the $14trn-investor coalition.

“Values are clearly part of it, but equally – it’s so financially material. The more people have understood tailings, the more they understand that this could radically change our perspective on a company in terms of whether they’re carrying a financial risk that they’re not equipped to deal with.”

The tool the initiative launched on Friday is the first publicly accessible database mapping a handful of the world’s tailings storage facilities. Users can see which companies own which facilities, whether dams have had stability issues in the past, and each dam’s “risk classification”, e.g. how much damage it would be likely to cause in the event of a failure.

For Matthews, this is the start of addressing the issue more holistically. “The investor community has engaged with parts of the problem before, particularly when Samarco happened, but we got it wrong. There we engaged the individual companies rather than engaging the systemic issue at the heart of the problem.”

The PRI’s Fiona Reynolds hailed the initiative’s progress so far as a “successful example of collaborative engagement…the kind we need to see much more of”.

But behind the slick database and tightly controlled PR message (finding participants to speak candidly on the initiative has been a challenge), there’s been potholes in the road so far.

Industry hasn’t been totally cooperative, with 395 (54% in total, 26% by market capitalisation) of 726 companies still yet to disclose. The database, which only includes firms that have reported fully, currently covers less than 2,000 of what could be up to 60,000 dams. Not one company based in China has responded to the request coming from the politically distant European investors. In China there are estimated to be more than 12,000 dams.

Matthews is the first to admit that much more remains to be done, and says it’s been a learning process. “We've had to start from a base understanding of different tailings dam constructions. And the fact is, we still don't know exactly how many there are even among listed companies, let alone private companies.”

"I hope they really listen to us, and create spaces for that to happen, because they also have responsibility for what’s happening. They have blood on their hands"

Securing and making sense of the disclosures has been a time-consuming process. Elaine Baker from GRID-Arendal, the Norwegian foundation tasked with creating the database, told the summit last week  “We had to do an incredible amount of cleaning of the data. It took time.” The summit heard how some firms didn’t answer all the questions, how there were varying interpretations of the questions, different standards used, and instances of inconsistent responses from partners of joint ventures.

Asked if there was a sense of the group having to pick up expertise on-the-hoof, Matthews says some back-and-forth with companies was to be expected. “It probably takes a couple of iterations of a disclosure for best practice to emerge and be identified and standardize responses to questions. Matthews says the forthcoming Global Tailings Standard, co-convened by the PRI, will help refine the disclosure exercise.

The initiative has big plans, perhaps the most ambitious being a “24/7 global tailings alert system”, of the kind seen in shipping and aviation to alert local and national governments, regulators and companies when monitoring reveals concerns. But it’s unclear how it plans to address the most concerning dams in the short term. Matthews says, “If it comes to light that there are dams that pose a risk from company disclosures, then obviously we are going to engage.” He won’t name specific dams or companies of concern. The group has spoken of the need for an initiative to remove the most dangerous dams, and is in regular contact with regulators, which are increasingly eyeing the issue. But as it stands, there’s still as many communities at risk from tailings dams as there were a year ago.

Meanwhile,  the Samarco dam is readying to resume operations, with those left homeless after the 2015 disaster still waiting to be resettled, and allegedly small numbers of residents offered compensation. The Renova Foundation, the body set up to administer the costs of the fall out of the disaster, says it has already allocated R$ 7.42bn (€1.6bn) for repair and compensation.

Later this year, representatives from the CofE, the Swedish AP funds, the PRI and the Local Authority Pension Fund Forum will set off on a joint shareholder delegation to Minas Gerais to try to square the company’s claims with accusations from the affected communities. Matthews says, “We’ve all been struck by how, four years down the line, there’s no houses built to replace those that were destroyed. There’s a multitude of reasons for that, but on a very fundamental level, promises were made that haven’t been addressed.”

Monica Santos, who lost her family home in Bento Rodrigues in the first disaster and is currently living in Mariana in accommodation rented by the foundation, says she’s never received an offer from the company. “I don’t want it to happen. Because I know I’ll suffer.” In Santos’ view, the compensation offered by the company is not fair. “They should not be the ones controlling the reparation process,” she says. “It should be us. The dam was constructed above Bento, not the other way round. So they should respect our community.”

For Santos, the investor action of the last year feels different to the engagement over Samarco, when she says the community felt ignored. “We had several meetings with investors last year and the community members were denouncing these practices and asking investors how long they’d keep investing in these companies that don’t respect human rights and that kill people. At the time they seemed to not believe what we were talking about,” she says. “I even told them, Bento will not be the first or the last community destroyed by this kind of operation. Just after Brumadinho, they started to make conversations with communities, and to believe they could really change the mechanism.”

For campaigners, the news of the investor delegation to Minas Gerais has spurred tentative hope. Rodrigues says: “I hope they really listen to us, and create spaces for that to happen, because they also have responsibility for what’s happening. They have blood on their hands. We’re not telling a fictional history – it happened in Mariana, it happened in Brumadinho, and there’s a real risk of it happening again.”