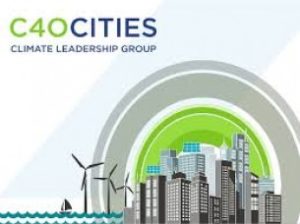 C40, the network of the world’s ‘megacities’ committed to addressing climate change chaired by Paris Mayor Anne Hidalgo, has collaborated with CDP (formerly the Carbon Disclosure Project) to present over 3,000 sustainable infrastructure projects in cities across the world to show how they can match the investment appetite and need for scale of major institutional investors.
C40 and CDP have analysed all of the low-carbon infrastructure projects under development in the C40 network. They announced the research at the C40 Financing Sustainable Cities Forum last week in London.
James Alexander, Director of the City Finance Programme at C40 Cities, says that investors have not created the international structures to help them answer the core questions raised when a green urban infrastructure project crosses their desk – these are knowledge of the city administration, familiarity with the technology being deployed and understanding of the proposed deal structure.
“We hope that the publication of the C40 and CDP city project pipeline, even in its current beta form, will provide assurance to the finance community of the scale of infrastructure under development in cities across the world, and help more institutions build up the capability to participate in the large deals currently under development.”
Alexander adds, “This project is in beta stage at present. We don’t have all the data we would like to have on value, progress and expected start dates of each project. However with the support of the financecommunity we believe we can capture this data, and create a pipeline that will add value to the deal-making process.” An example for sustainable infrastructure ‘upscaling’ is a planned clean bus initiative: twenty-seven mayors in C40 cities have signed a clean bus declaration and are currently working out a plan to build electric bus systems in their cities. This would build on the experience of a pilot project in Mexico City where an electric bus project worth $100m is under development to create a green corridor in the city, with the currently expected launch date to be during 2018. The project is backed by The C40 Cities Finance Facility (CFF), which provided $1m in dedicated technical assistance. CFF is funded by the German Federal Ministry for Economic Cooperation and Development (BMZ) and supported by the Inter-American Development Bank (IADB). Delivery of technical assistance is coordinated jointly by C40 and Deutsche Gesellschaft für Internationale Zusammenarbeit (GIZ).
C40 cities – actually now 91 cities, as opposed to the 40 founding cities – work together to become more sustainable by sharing best practices and creating shared solutions to financial and technical challenges. Investment in low carbon infrastructure in cities can vastly curtail the rise of CO2. A research report by C40 and Arup titled Deadline 2020 estimates that $375bn is necessary in the funding of low carbon infrastructure projects over the next four years to meet the Paris Agreement.