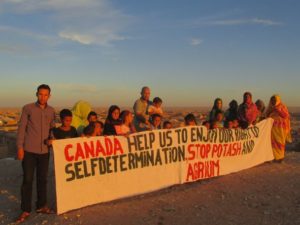 Potash Corporation of Saskatchewan (PotashCorp), the Toronto/New York listed fertilizer group, is facing a shareholder resolution calling on it to conduct a human rights assessment of its sourcing of phosphate rock from the disputed Western Sahara region.

The resolution calls for the company to publish an independent assessment “having regard to the UN Guiding Principles on Business and Human Rights and associated international human rights standards”.

The investors argue that PotashCorp purchases phosphate from Office Chérifien des Phosphates (OCP), a Moroccan state-owned enterprise in the “Non Self Governing Territory” and that Morocco’s claim of sovereignty over the area is not recognized by the International Court of Justice or the United Nations.

PotashCorp and its peer company Agrium were behind 64.5% of all conflict mineral purchases from occupied Western Sahara last year, according to Norwegian NGO Western Sahara Resource Watch’s latest P for Plunder report. The two have been excluded from some investor portfolios over the issue.

This is the second year this resolution has been filed at PotashCorp. Last year, the resolution received 6.7% of the shareholder vote, with support from a number of large public sector pension plans in Canada, said SHARE’s Executive Director Peter Chapman.PotashCorp, which holds its AGM on May 10, is advising its shareholders to vote against the proposal.

The company says using other sources of phosphate is “not a viable option”, adding that it has no physical presence in the area.

PotashCorp says in its latest proxy circular (AGM agenda) that it is “mindful” of the dispute, saying: “We also take our human rights responsibilities and obligations very seriously and strive to maintain the highest level of ethics and integrity in our purchasing processes.

“Our objective regarding these matters is to ensure that our business relationship with OCP lives up to our Core Values and Code of Conduct as well as the international standards, trade and customs laws applicable to a purchaser who seeks to maintain an ethical and sustainable supply chain.”

It argues that neither the UN nor any other competent legal authority has concluded that the production and use of phosphate rock from Western Sahara violates international law.

“In the absence of a permanent resolution, a distinction must be made between political issues and the legal and other responsibilities placed on companies operating in the region or having business relations with companies operating in the region,” it states. It adds that its senior management have visited Western Sahara and seen firsthand the economic and social conditions. It has also obtained legal opinions that OCP’s operations directly benefit the local people and are consistent with international legal obligations.